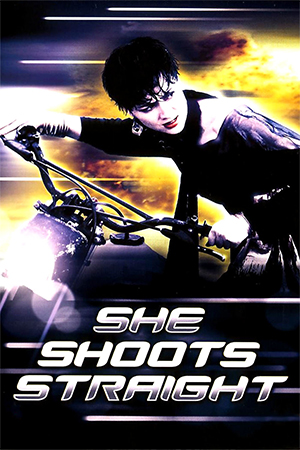 After having previously had small but impressive roles in earlier films such as ‘Eastern Condors’, directed by husband Sammo Hung, Joyce Godenzi (often called Mina) starred in this impressive action flick as a tough cop on the trail of some violent drug smugglers. This is very reminiscent of earlier femme fatale flicks such as ‘Yes, Madam’ and ‘Royal Warriors’ just falling short of those 2 classics.

A simple and fast moving story about a tough female cops, is told with style, if not great direction, by Yuen Kwai; the director of other classic action flicks such as ‘Righting Wrongs’ and ‘Hero’. Here he gets the best out of the whole cast, especially an inexperienced Godenzi.

Mina’s more Western looks come from her Australian father, and her beauty made her a Miss Hong Kong in 1986, with Michelle Yeoh having held the same honour in Malaysia. Like Miss Yeoh, Mina had never been formally trained in martial arts so was pushed to the limit by Dick Wei in order to look good on screen. The training paid off, as she impresses almost as much as Yeoh and Rothrock did a few years earlier.

Although the film failed at the box office, which is probably more to do with her ‘frowned-upon’ relationship with Sammo, there is much to enjoy here as the film contains some enjoyable drama as well as neatly choreographed action. A worthy addition to the DVD rack for any fan of 80’s style femme fatale flicks.