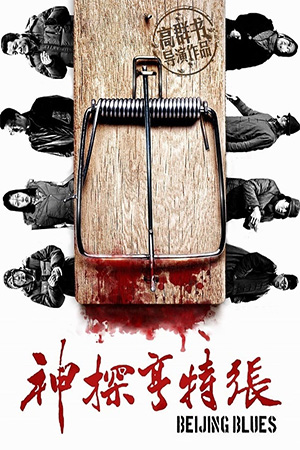 After bringing the style of the Western to the deserts of Western China with his last film, ‘Wind Blast’, Gao Qun Shu returns with a film about as far removed from it as could be imagined. ‘Beijing Blues’ is a neo-realist police procedural that looks at real life policeman Zhang Huiling, his contemporaries and his daily work on the streets of Beijing.

Zhang Huiling is noted as one of the most successful law enforcers in the land after having brought over fifteen hundred criminals to justice for a variety of crimes. His day-to-day routine are a world away from the slick world of American prime-time cop series and much of his time is spent following suspects and stopping the gangs of thieves and swindlers who use the affluent streets as their workplace. Although big-hearted Zhang is sympathetic to the plight of the under-privileged who have fallen into crime to make ends meet, his devotion to duty and the laws of China always come first.

Without any real narrative and the shallowest of character exposition, ‘Beijing Blues’ is not a film for casual viewing. Its intention is to be like a documentary, even winking to the viewer about this by incorporating a sub-plot about Zhang being filmed for another production. That resolution to cut away any cinematic flab means that ‘Beijing Blues’ is unlikely to be a film that will captivate many people, while not quite showing the insight one would expect from a good documentary on the subject.

The first thirty minutes seem like a never-ending chore as the camera jerks around in that affected ‘THIS IS REAL LIFE’ manner that is so favoured by directors seeking verisimilitude today. This renders some of the scenes practically unwatchable as it is difficult to ascertain who is doing what and why. However, endurance beyond this awkward quarter is rewarded as the focus becomes clarified and the actual process of investigation begins to play a role in the drama. The character of Zhang also grows throughout and though little is revealed about his past, it’s easy to feel affection towards his fearless honesty.

‘Beijing Blues’ is occasionally frustrating, but acts as an interesting anathema to the usual portrayal of police work as gritty or glamorous. In this film a murder is resolved quicker than the case of a phoney fortune-teller; the unpredictability and yet utter mundanity of the job is skilfully emphasised. Whether this is a neo-realist masterpiece (as its countless would awards imply) or not will dependant greatly on the individual viewer; for the record I would suggest that it sits in the middle of both opinions and for that reason deserves wider attention.