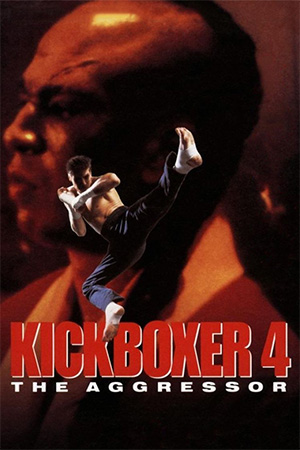 After being framed for murder by Tong Po, David Sloane (Sasha Mitchell) has spent the last two years in prison. Meanwhile, Po has become a powerful drug lord and has taken Sloane’s wife, Vicky captive as his personal sex slave. Luckily for David, the government are equally frustrated with Po’s activities and they approach him with a deal: infiltrate a martial arts tournament being held at Po’s private compound in exchange for his freedom. The winner of said tournament will earn themselves a one-on-one match with the host, a clause that instantly makes David accept the opportunity. Now he’ll have to give up his identity and risk everything he has if he is to have any hope of bringing Vicky home alive.

‘Kickboxer 4’ opens with a series of flashbacks and a monologue that are intended to bring the audience up to speed. All good and well you may think, except that several of the most recent happenings in the story are… well, completely new. We listen in as David recounts a number of rather significant occurrences in his life, all of which have clearly been inserted as an excuse for our kickboxing superhero’s latest quest to rescue the woman he loves (or so we’re told, as we’ve never met her before). From this point on, we have to suffer through several scenes of Mitchell’s undercover “acting” before the film eventually settles into its intended tournament setting. Unfortunately though, none of this makes for a particularly entertaining hour and a half as it’s really just David stomping around looking mean and moody while various other pointless side characters pop up to help or hinder him. In fact, the only real entertainment comes from Tong Po, now played by Kamel Krifa, but that’s simply because his performance and make-up effects are so laughably bad.

As it is effectively a tournament movie, you would at least expect to see some solid fight sequences in ‘Kickboxer 4’. Sadly, that really isn’t the case. While some of the actors do display a degree of competency in various martial arts, the choreography itself is just far too dull to really make an impact. Each bout seems to follow exactly the same format; the competitors bow to each other in an overly complex way, one or two blows are thrown and then someone passes out. Unsurprisingly this isn’t very fun to watch and the fact that we have to sit through each fight in their entirety only makes matters worse. As for the all-important final bout, you can’t help but feel that the outcome is inevitable. Tong Po is no longer the invincible opponent we once knew and even though he has already killed multiple others, he seems strangely content with facing off against David in an honourable battle.

‘Kickboxer 4’ feels like an homage to some of Van Damme’s earliest hits (specifically ‘Bloodsport’ with a sprinkling of ‘Lionheart’ and ‘Kickboxer’) but it fails to make the most of its action opportunities. Much like Mitchell’s other entries into the franchise, it just feels like a lazily constructed and unnecessary sequel that doesn’t even know how to put together a solid fight scene.