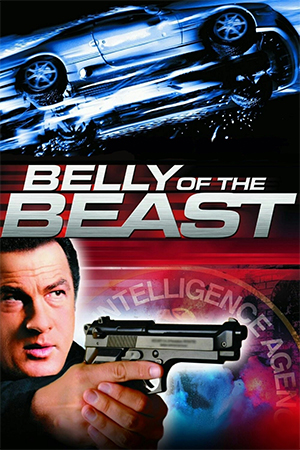 For those of us who grew up in the West loving action films, Steven Seagal is probably one of those names we remember fondly alongside the likes of Chuck Norris and Jean Claude Van Damme for making outlandishly violent, substance-free, popcorn fight fests. Unfortunately, like those other two, he hasn’t aged particularly well and it’s surprising in a way to still see him making these kinds of films.

‘Belly of the Beast’ is a straight to video English language actioner, which may not have gained my attention, but for the fact it is directed by Ching Siu Tung. Siu Tung is the legendary director of films like ‘A Chinese Ghost Story’ as well as being one of the world?s top action choreographers most recently seen styling the moves for films such as ‘Hero’ and ‘Shaolin Soccer’.

Unfortunately, but unsurprisingly, this does not rank among Siu Tung’s best (or even Seagal’s for that matter) as it is a painfully generic kidnap/rescue flick with nothing in the plot or script to rise above most other straight to video fare. However, for those of us who care less about dialogue than action, then there are still some worthwhile moments.

If this had been directed by an unknown American with a typical western stunt co-ordinator then I would have been impressed by the fight scenes on show, as they are quite stylish and often cleverly choreographed. That said, the usual MTV editing and short length of the fights is typically American. Given that I know Siu Tung has done far superior work over the past 20 years, this makes the action seem less impressive.

It may seem that this review is entirely negative, but that is not the case. It’s probably comparable to films like ‘Romeo Must Die’ and ‘Exit Wounds’ which I personally enjoyed on a superficial level. If you did too, then this might be worth a rental.