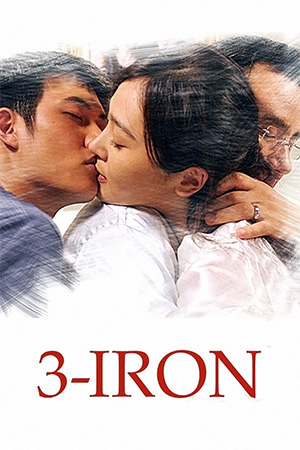 Written and directed by Kim Ki-Duk who brought us ‘Samaritan Girl’ and ‘Spring, Summer, Autumn, Winter… and Spring’, the viewer of ‘3-Iron’ is invited to see the world from a simpler, often dream-like point of view, and forget the busy pressured daily life chosen by most.

As a young homeless drifter, Tae Suk spends his days breaking into other people’s homes when they are away, living in them, before moving on to the next. Always treating their homes with respect, he moves from place to place hand washing the unwitting owner’s laundry and doing odd jobs before he leaves.

This simple life is forced to change when he chooses the apparently empty home of an affluent businessman, only to be disturbed in the night by the diminutive, physically abused wife he left behind (touchingly portrayed by Lee Seung-yoon). Tae Suk flees the house but later revisits to rescue her from the abusive husband upon his return. What follows is a touching tale of companionship and love in which these two new friends continue Tae Suk’s simple, yet unusual, way of life without ever needing to speak a word.

In recent years, Korean cinema has continued to push its way into the consciousness of international movie audiences with its strong mix of drama, horror and action. The feeling of freshness experienced by watching contemporary Korean film is reminiscent of the way Hong Kong cinema captured my imagination many years ago.

Numerous times whilst watching ‘3-Iron’, I could not help but think how this film would not be made in the West, at least not with the intention of releasing it to a mainstream DVD and Cinema audience. Yet, the restrictions placed upon American filmmakers by the focus groups and expectations of powerful studios do not apply so prominently in the East. As a result, if you want something genuinely original and touching, one has to look to Asia, and thankfully, more people than ever are doing so.

In conclusion, if you expect your Asian films to be a fast moving action bonanza, then this is clearly not for you. However, if you want to experience a beautiful, touching drama with a dreamlike atmosphere, then ‘3-Iron’ comes highly recommended.