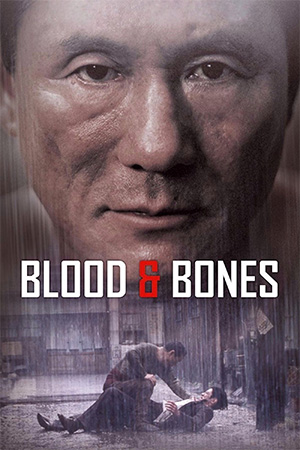 Takeshi Kitano has played a gallery of rogues during his career, but his performance as Shunpei Kim, a brutal Korean immigrant in Yoichi Sai’s ‘Blood and Bones’ is his most powerful.  Kitano’s acting style is famously low-key, but here he is an explosion of rage, terrorising his family and children through an epic forty-plus year time span.

Told from the perspective of Kim’s cowed son Masao (Arai), the film follows the tyrant’s long reign of terror over his neighbourhood in the southern Japanese city of Osaka.  An episodic plot tells a kaleidoscope of incident over two and a half hours, all centred on Kim, a self-made man due to a fishcake factory and money-lending business, and those caught in his web.

These include Masao, his sister Hanako (Tabata) and their suffering mother (Suzuki), plus Kim?s brother and an illegitimate son.  Director Sai, adapting a novel based on true events, keeps the film enclosed despite the lengthy running time, pointedly commenting on how Japan’s Korean community is segregated and ghettoised, none of them benefiting from Japan?s post-war miracle economy except for Kim, and his talent for extorting money and labour from his neighbours.  Throughout the decades depicted Sai does not alter his shooting style, creating a never-ending cycle of abuse (which some reviews have criticised for being too repetitive).

‘Blood and Bones’ strongly echoes Shohei Imamura’s ‘Vengeance is Mine’ (1979), which also told the story of an unrepentantly cruel man.  Where Sai’s film falls short of Imamura’s is in emotionally engaging the audience.  While ‘Blood and Bones’ is a commanding experience, Kim remains a baffling figure, and those around him suffer from a lack of characterisation.  Story ellipses suggest major scenes were cut, to the detriment of understanding motivation; why does Masao jump from victimised hero to callous shit?

Reason for this may be the localised world depicted demands prior knowledge, and subtitles cannot reflect the subtleties of Osaka-ben, the film?s idiosyncratic dialect.  It will be interesting to see if the praise given in the East (it is Japan?s entry for 2006’s Best Foreign Film Oscar) will be repeated in the West.

But, the film contains enough haunting moments, including Hanako’s suicide attempt and Kim uncharacteristically bathing a terminally ill lover, plus a genuinely profound ending, to leave the impression ‘Blood and Bones’ is a near-miss masterpiece.