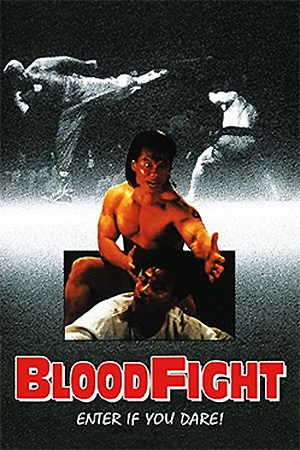 Years after retiring from the professional circuit, Masahiro Kai (Yasuaki Kurata) longs to return to the world of free fighting martial arts. Unfortunately he feels his body is no longer up to the challenge, so he sets out on a quest to find a suitable student. After a somewhat failed attempt at straightening out the local hoodlum, he finally locates a man named Ryu Tenmei (Simon Yam) who seems to possess all the right qualities. And so, the pair begin a brutal regime of training that will push Ryu to his limits and hopefully allow him to mount a serious challenge against the current champion, Chang Lee (Bolo Yeung).

As you can probably already tell from the title, this 1989 martial arts actioner was released as another attempt to cash-in on the success of ‘Bloodsport’. While this may not have been the original intention, the film was clearly always marketed towards an international audience with all-English dialogue and even a cameo by Bolo Yeung. Whatever the producers were going for though, the finished product doesn’t exactly work out all that well.

Bizarrely opening with fights from the finale, ‘Bloodfight’ plays out the majority of its running time as one giant flashback, with Kurata’s character going from a washed up fighter to mentor and eventually back to fighter again. This overall idea certainly has some promise, but the editing for the first half is absolutely atrocious. There are several scenes that are almost completely incomprehensible and most of the focus is on a gang of bullies wreaking havoc. At about the halfway mark, the film then takes something of a left turn before finishing up with an extremely long training montage. As you can probably imagine, this doesn’t exactly making for a thrilling ride and it is further hampered by the patchy leading performances, most of which suffer due to the casts varying grasp of English combined with some very poor dialogue.

This being a tournament movie (of sorts), it does at least feature its fair share of fight scenes. As mentioned before, the opening has several scenes from the tournament so we get to see a selection of fighters with varying styles, all facing off against each other. Although it’s obvious that some of the combatants do have some genuine skills, most of it is very awkwardly cut together so they either seem to end prematurely or just fizzle out with a weak finish. Kurata himself obviously fairs a lot better, although his style seems to be all over the place. In the opening sequence we see him performing using only throws and pins, but then after that he switches to just very straightforward kicks and punches. I mean, it’s not terrible especially when compared to a lot of similar American movies from the time, but it does all feel a little bland. This is never more apparent than in the final battle between Kurata and Yeung, which is pretty much straight out of a Rocky movie. Kurata gets knocked every which way but loose before he eventually comes good and manages to win the fight using sheer perserverance.

Although I like a lot of the people involved, there’s no escaping that ‘Bloodfight’ simply isn’t a very good martial arts movie. Part of the problem is that it never really knows what story it is trying to tell; half of the film is a ‘Bloodsport’ rip-off while the other is a messily cobbled together morality tale. Either way, none of it works particularly well and it’s unlikely to leave much of a mark on your memory.