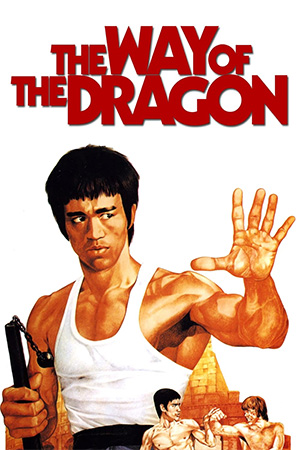 This was Bruce Lee’s directorial debut following the huge success in the East of ‘Fist of Fury’, and he plays Tang Lung, a country bumpkin from China who travels to Rome in order to help a family friend whose restaurant is being harassed by thugs.

In a similar role to his Hong Kong Action debut ‘The Big Boss’, it is a while before we see Bruce in action, but when we do he shows why no one in Hong Kong cinema at the time could touch him for skill, speed, grace or screen presence.

Until recently, all scenes featuring nunchaku had been excised by those lovely chaps at the BBFC, and as a result, Lee’s finest moments had barely seen the light of day in the UK, helping to line bootlegger’s pockets. One such scene takes place in a back alley and showcases Tang Lung taking on a group of thugs using 2 pairs of nunchaku simultaneously!

The name Tang Lung may ring a bell with many Kung fu fans, and this is because following Bruce’s death many doubles were hired to make some bad films cashing in on his fame while killing the industry at the same time. One such double was given the name Tang Lung in a vain bid to boost sales.

This was a groundbreaking movie in 1972 as the farthest any other Hong Kong film travelled to film at the time was Taiwan or Korea. As a result, The Way of the Dragon’s fantastic scenery and powerful fight sequences made this Bruce Lee’s highest grossing movie in Hong Kong and a cult classic worldwide.

While ‘Fist of Fury’ is the Little Dragon’s best film, this comes a close second and would not be out of place in the DVD rack of any martial arts movie fan.