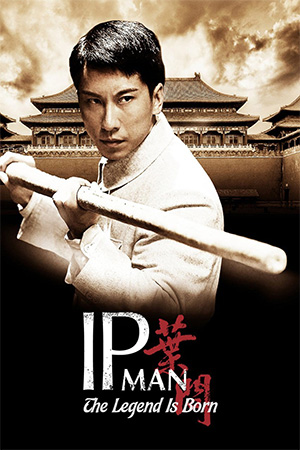 Herman Yau’s take on the ubiquitous Ip Man story begins with the early life of the future hero. Alongside his half brother Ip Tin-Chi, the pre-pubescent Ip Man is left to learn Wing Chun under the tutelage of a revered master (a pleasing cameo by Sammo) and quickly develops into one of the senior students of the school. As a young adult Ip Tin-Chi is groomed to be a future head of the Wing Chun cabal while Ip Man is sent to Hong Kong to study, meeting elderly Wing Chun master Leung Bik during a chance encounter there. Combining scholarly pursuits with learning an evolved form of the martial art developed by Bik, Ip Man eventually returns to Fu Shan only to face opposition to his new skills.

There really haven’t been that many ‘Ip Man’ films recently, it just feels that way. Perhaps its cultural impact, the allusions popular Cantocomedies make to it (‘72 Tenants Of Prosperity’ et al) and Donnie Yen’s omniscience in Hong Kong’s film industry have just created a hypnotic effect on this reviewer. Nevertheless, the thought of another Ip Man  production didn’t fill me with excitement, though an experienced hand like Herman Yau has as much right as anyone else to join the fray.

Yau’s ‘Ip Man’ is a far less grandiose production than the Donnie Yen blockbusters, but is also a little less pompous as a result. There’s none of the jingoism of ‘Ip Man 2’ – though there is the obligatory scene of a Gwailo calling the Chinese ‘Sick men of Asia’ and expected Sino-Japanese tension, these moments don’t bludgeon the viewer into submission the way Wilson Yip’s sequel did. Ironically, this does result in ‘The Legend Is Born: Ip Man’ having a weaker dramatic punch overall. Dennis To doesn’t  have the comportment of Donnie Yen, therefore the scenes of quiet repose have an awkwardness that is impossible to ignore; To is a capable performer but cannot fill the shoes of the eponymous legend.

‘The Legend Is Born: Ip Man’ does not try to outdo the spectacle of its more lavish inspiration, though Herman Yau does try to give the viewers the ample Wing Chun action they crave. With Leung Siu Hung choreographing, the fight scenes build in intensity and have a tinge of authenticity that is very welcome. The concluding showdowns do not give the film the crescendo of action it appears to be building up to, but the variety of solid duels prior to this are not easily forgotten.

Vitally, Herman Yau utilises the expertise of Sammo and Yuen Biao, the former in a cameo, the latter with more material to get his proverbial choppers into. It’s hard not to recall the ultimate Wing Chun film, ‘Prodigal Son’, when these two legends go toe-to-toe, though such comparisons do no favours to ‘The Legend Is Born: Ip Man’. Yet seeing the greats of the past appearing as elder statesmen opposite potential stars of the future is a refreshing reminder of Hong Kong cinematic history, a nod to the ‘Golden Age’ of martial arts cinema. Such memories are painful given the minimal output of Hong Kong industry at the moment, but with directors like Herman Yau still active in so many genres – and with results that are as pleasingly entertaining as the film under review mostly proves to be.