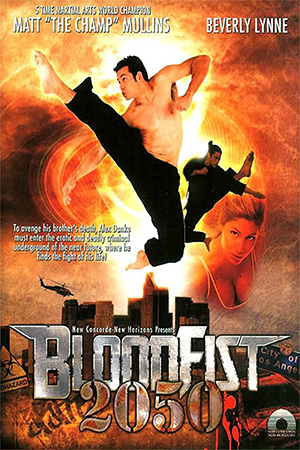 After his brother is murdered by an unknown assailant in an alley, Alex Danko (Matt Mullins) heads to Los Angeles to try and track down the person responsible. There he is introduced to Ramirez, the hardened Detective in charge of the case, who explains to Alex that his brother was most likely killed due to his involvement in the ultra-violent underworld of extreme martial arts. Under the tutelage of Ramirez and with the help of his brother’s alluring ex-lover, Alex agrees to enter the ring in an effort to unmask the murderer.

‘Bloodfist 2050’ is the first in the series not to feature Don Wilson, and instead boasts the inclusion of another kickboxing champion in the form of Matt Mullins. Relocating the action to an apocalyptic future, complete with burning barrels and roaming gangs of leather-clad villains, the film reverts to the fairly obvious format of having our hero entering an underground fighting tournament in search of vengeance. Aside from the fact that we’ve seen this plot a thousand times before, ‘Bloodfist 2050’ definitely looks and feels like a straight-to-VHS effort made 10 years prior. The lazily constructed futuristic backdrop really serves no real purpose and most of the mundane running time is spent either in the ring or watching long, drawn-out stripteases in a seedy backstreet bar. As for the cast, Mullins makes for a fairly run-of-the-mill low budget hero, and the only real standout performances (by B-movie standards anyway) come from Joe Sabatino as the mentor and Joe Mari Avellana as a silent, chin scratching MC.

Luckily, ‘Bloodfist 2050’ does feature a few half decent fight scenes and it’s clear that some effort was put into the choreography. In fact, I’d say perhaps a little too much effort as some of the fights feel so overly rehearsed and staged that they often come across as rather clunky. That aside though, Mullins is definitely a solid fighter and he whips out a number of impressive kicks and flips during his bouts. Sadly none of his opponents are ever really fleshed out to Bolo Yeung levels, but there are still a couple of interesting if somewhat short-lived duels with some skilled opponents.  Of course, I am judging all of the combat purely on old school American martial arts movie standards, so you should definitely go in expecting a similar level to (or perhaps a notch above) the film’s predecessors.

‘Bloodfist 2050’ certainly recaptures the feeling of 90s American martial arts B-movies, so much so that it actually winds up feeling a little late to the party. If you enjoyed any of the other cheap actioners from the era though, you may appreciate some of what it has to offer.