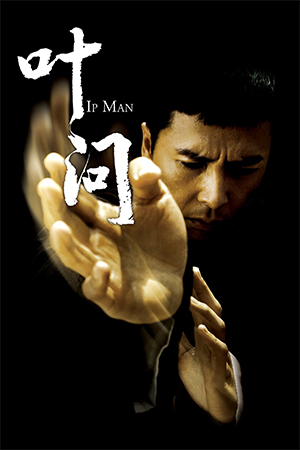 My review of ‘Ip Man’ may be slightly biased due to a couple of factors. One being that many years ago I was fortunate enough to meet and train with Donnie Yen, finding him a very charismatic and charming man, contrary to a lot of beliefs.  Also, I had the great honour of being part of a seminar that the great Ip Chun (Ip Man’s eldest son and advisor on this film) gave several years back when I was training in Wing Chun.  So as you can see, this film holds a great sentimental value but I’ve tried to remain as neutral as possible when reviewing it.

Let me start by giving you the background. This biopic, which centres around Ip Man who was one of the earliest Wing Chun martial arts exponents, sees Donnie Yen play the lead as a man of wealth and dignity who is respected by the town of Fo Shan. Within the town’s core lies various schools of martial arts but everyone within the town knows that the true master is Ip Man, who practices his style every day to perfect his technique. The real bulk of the story gets set in the outbreak of the Sino-Japanese war, where General Miura (Hiroyuki Ikeuchi) takes over not only the town but also sets up his headquarters in Ip Man’s grand house and reduces the master and his family to a life of near poverty.  We then see how a man who prided himself on his privacy has to put his skills to good use to help Fo Shan and its people restore their pride and rid the area of the evils of the Japanese.

What we have here is a film that gives Donnie Yen a chance to act. Yes, I might be stretching things a little but I think he can and does act, and it’s a very restrained performance that I believe he gets about right. There are moments of ladish behaviour when he’s showing a student how Wing Chun can easily counter the students moves, but I think it works well for the most part and up until the half way point Donnie Yen portrays a man that you think Ip Man was.

Fan Siu-Wong also gets a decent amount of on-screen time with a side story about an upstart martial artist trying to prove he’s the best, and perhaps if he were given more time he might have stolen the show.  If you manage to pick up the DVD with the deleted scenes, there’s a few with Fan Siu-Wong that deal with what eventually happened to his character. Similarly, Gordon Lam and Hiroyuki Ikeuchi also have different endings and I recommend watching them as they change the outcome drastically and would surely have given the movie a totally different feel.

I know what you are all after though and that’s the fight scenes as let’s be honest, that’s what you want from a Donnie Yen film. Thankfully, you wont be disappointed with the action, which is choreographed by fan favourite, Sammo Hung. The Wing Chun scenes are spot on, from the very first fight showing you the power these movements can deliver, to the brutality of the big fight where Ip Man takes on 10 of the Japanese and shows why this martial arts style looks so good on screen.

So, I’d give ‘Ip Man’ 4 out of 5 as it’s a film that mostly delivers on all of its promises. Perhaps I could have given it 5 if it had lasted a little longer, but it certainly has the potential to be a great franchise in the vein of the ‘Once Upon A Time In China’ films.  If you’re an action fan you won’t be disappointed and for me, this is Donnie Yen’s best film to date from an acting perspective.  I’m off now to pop ‘Ip Man’ back in my DVD player and to ponder whether I’m still young enough to jump back onto the Wing Chun mats.