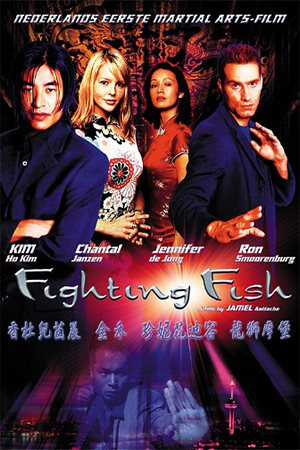 When news filtered out about the development of the first Dutch Martial Arts film, I followed its progress with anticipation.  Utilising the high-kicking talents of Ron Smoorenburg (‘Who Am I?’), the early trailers showed a lot of promise and the film was clearly influenced by Hong Kong action cinema. Sadly though, the finished product isn’t quite as appealing.

A-Ken (Ho Kim) is an ex-gang member from Hong Kong who travels to Rotterdam when his brother is killed in a battle between two rival gangs.  There he meets up with some of his old comrades who immediately point him in the direction of their enemies, led by A-Ching.  Kim leaps straight into action and storms their hideout, letting his fists do all the talking.  However, it would appear that nothing is as clear cut as he has been led to believe and no one is openly taking responsibility for his brother’s death.  During his search, Kim meets a Dutch girl and falls in love which only seems to distract him from solving the mystery.  He needn’t worry though, as all is about to be revealed and he will find that all paths will lead him to an eventual confrontation with the murderer.

From the opening few sequences, it’s fairly obvious that ‘Fighting Fish’ is an amateur production. The story, what little there is of it, is very poorly handled and it suffers from an obvious stop-start approach. One minute we are being spoon fed a few ridiculously laughable plot points, and then it bursts into an action sequence for absolutely no reason at all. This makes the story feel like an obvious afterthought and no attempt seems to be made to flesh out any of the characters. Of course, the acting doesn’t exactly help matters either. Ho Kim is easily the worst offender, as his dialogue delivery is unconvincing and he seems far more preoccupied with striking poses than actually interacting with anyone else.  Meanwhile, the other top billed actor, Ron Smoorenburg, is really little more than window dressing. He pops up as the typified hard-as-nails henchman, throws a kick or two and then rapidly exits stage left.

It’s suitably fitting that the musical score that accompanies the majority of the action in ‘Fighting Fish’ sounds like something out of a Chinese Opera.  Clearly far too much time has been spent on choreographing and rehearsing each sequence and now they look more like dance routines than any kind of realistic combat.  Smoorenburg is probably the weakest link and it’s clear that his timing issues haven’t improved since ‘Who Am I?’ (watch the out-takes to see what I mean). Whenever he is in action he looks to be so focused that you can almost read exactly what he is going to do next. Ho Kim fares somewhat better as he clearly has a larger repertoire of moves, but he too suffers from an over-reliance on preparation and fails to create anything remarkable.

While it’s always nice to see a martial arts film emerge from a new territory, ‘Fighting Fish’ just doesn’t quite cut the mustard. The lack of a real plot combined with some extremely theatrical action often makes the film feel more like a set of fighter’s showreels rather than a proper movie.  Let’s hope that the producers haven’t been put off though, and they use this experience as a learning curve.