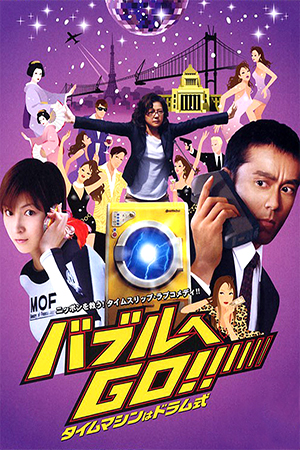 In light of the current worldwide financial crisis, it seems strangely comforting to see a country who have been blighted by savage recession for nearly two decades and still produce a blistering comedy about it. Japan’s almost mythical economic post-war rise finally came to an end – perhaps inevitably so – at the beginning of the 90s and may never recover its previous lustre. Not that my intention is to depress our Asian readers or scare the rest of the world with prophecies pointing to the same thing happening worldwide now, but this gives some basic exposition of the world around Yasuo Baba’s glorious ‘Bubble Fiction: Boom Or Bust’.

The narrative begins with debt-ridden club-girl Mayumi (Hirosue) attending her mother’s funeral and being bothered by a persistent loan-shark as she leaves. Mayumi is pulled to one side by finance minister Shimokawaji and asked to meet him at the government offices to discover something that will be of interest to her. Initially she fears that another debt left by her errant boyfriend has been put upon her shoulders, but Shimokawaji tells her that, remarkably, her mother is still alive albeit trapped in 1989. Mayumi is obviously quite sceptical especially when she discovers that the time machine that sent her mother back is in fact a specially altered washing machine hidden in the bowels of a secret national research agency. Proof of the event is forthcoming though and the bewildered woman is suddenly confronted with a bizarre task: go back to 1989 in the same device, find her mother and complete the mission of stopping the bursting of Japan’s financial bubble.

Mayumi eventually agrees to save the day and, wearing the special ‘Japan Finance Ministry’ swimsuit, is hurtled back 18 years. She arrives in 1989 and throws on the very 21st century clothes she has transported back with her, setting out into Tokyo to find her mother. Mayumi is immediately struck by the lavish opulence around her as her countryfolk, completely unaware of the impending doom, throw money around without a care in the world. When she finally meets up with the past version of Shimokawaji, she is shocked to see that the stoic, serious-minded minister of 2007 is a hopelessly oily Lothario in the current time. He oozes up to her and blindly agrees to her time-travel story so that he can take advantage of her. Unfortunately, there is a twist around the corner for the pair and someone well aware of her arrival is already plotting to stop the plan.

It may be an oxymoron to say Japanese humour thrives on dead-pan zaniness, but that’s exactly what we’re once again treated to in ‘Bubble Fiction: Boom Or Bust’, a comedy that has its own national sensibility stamped all over it yet is always accessible. As with so many great Japanese comedies of the modern era, the story starts relatively slowly and then develops a self-confidence that ensures the majority of the film is a real treat. ‘Bubble Fiction: Boom Or Bust’ is also furnished with a sharp satirical edge, pointedly highlighting the pre-recession decadence and the sheer arrogance of those in power at the time. Once again, such satire is easy to appreciate for viewers outside of the Far East as the targets are worryingly familiar.

One of the main sources of entertainment for films that show characters from the present jump back to the past is the knowing winks of humour peppered throughout the narrative. As someone who considers himself comfortably lacking in style or fashion sense – so much so that my very appearance in clothes shops tends to repulse the sales assistants – I can chuckle with an aloof air about the awful frizzy perms and gawdy outfits that Mayumi is faced with back in 1989. What also amuses is that our leading lady’s own faddish style is the source of great ridicule by the various other characters she meets. And hearing MC Hammer playing during the graduation scene reminded me of those lonely school discos when even a ladle full of my pater’s ‘Old Spice’ failed to get me a dance for the night.

‘Bubble Fiction: Boom Or Bust’ is a giddy cocktail of absurdism, social commentary and sci-fi adventure with the laughs eventually conquering everything. It’s almost like a Japanese ‘Mighty Boosh’ so oddball are some of the situations, but the narrative has enough inherent tension to drag us along for the ride. Ryoko Hirosue is adorable as our plucky heroine while Hiroshi Abe is an excellent companion in his dual-role. Yasuo Baba may leave significant gaps between each cinematic release, but productions like this make the audience appreciate the value of quality rather than quantity.