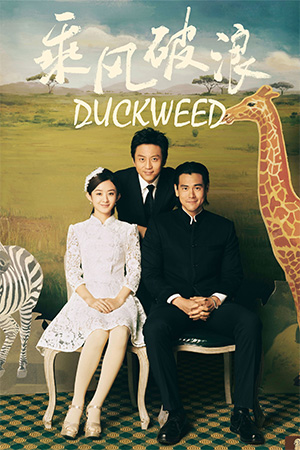 The year is 2022 and Chinese rally driver Xu Tailang (Chao) wins the world championship in front of a global audience. At the podium finish, with the international media buzzing around, Xu uses his speech to bash the role his father played in his life and, as the patriarch looks on from the cheering crowd, declares that everything he achieved was with no thanks to the man who raised him in later life. A freak accident gives Xu Tailang a chance to experience exactly what his parents went through as, after a crash that leaves himself and his father in comas, the brash young driver is transported back to 1998 and the town where his dad was a minor legend. As he befriends his father though, Xu begins to realise that his understanding of history was very different from the truth and finds that this small time hoodlum is in fact a man any son might be proud of.

Relatively unheralded at the fierce market place of Chinese New Year 2017, ‘Duckweed’ went on to destroy much of the competition, passing the one billion yuan mark in less than a month. Films like ‘Duckweed’ exist as minor antidotes to the bluster of Chinese New Year releases; make no mistake this is a polished commercial film, but it’s certainly much less about the noise and fury the way its contemporaries are. It takes something that is so easy to relate to – family strife, not time-travel! – gives it a slight sci-fi twist and just lets the characters develop. By the end of the film it is no surprise that the audience’s view of all of the main characters has completely changed.

Director Han Han is something of an Asian renaissance man; a champion rally driver like his leader character and a writer, singer, and blogger to boot. Han Han borrows liberally from that near perfect time-travel comedy morality tale ‘Back To The Future’, but he puts his own spin on its twists and turns. There are the expected misunderstandings with his younger parents and comedy centred around differences between 1998 and now, yet none of it is lazily lifted from the source and it allows for a very Chinese spin on events at the time.

The cast are all pretty much spot on with Eddie Peng continuing to expand his range in a role that calls for a sombre performances that turns comical and back again. The film is also packed with solid supporting characters who help flesh out the world and make it more realistic despite its extraordinary concept. Nearly all of the comedy works well and Han Han ensures it doesn’t get bogged down in silly humour the way other Asian films can have a tendency to. This is also of benefit when things take a more serious turn as the tone isn’t jarring our out of kilter with what preceded it. There aren’t any surprises in ‘Duckweed’, but for a well made feel-good film it’s about as good as we’ll see this year.