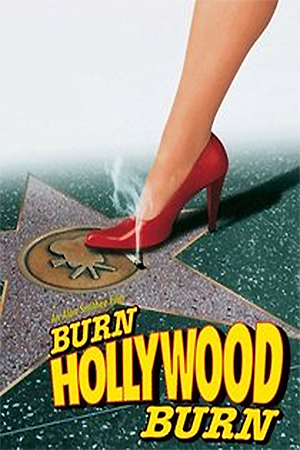 Made a year before the huge success of ‘Rush Hour’, ‘Burn Hollywood Burn’ has to be Jackie Chan’s most bizarre attempt to infiltrate his image into the American market. Not only is his role a small one, but it is also completely devoid of action.

‘Trio’ is going to be the biggest movie ever!  Uniting three of Hollywood’s A-list stars in the form of Sylvester Stallone, Jackie Chan and Whoopi Goldberg (?!), the film promises to deliver all the action and adventure you could wish for but there is one small problem – the only print in existence has just been stolen.  Ironically, it’s the director Alan Smithee (the name used by a director when he disowns his movie but as a twist here it’s his real name) who has taken it because he just thinks his masterpiece has been so butchered by the Hollywood executives that he can’t bear to let anyway see the mess that is left.  And so, ‘Burn Hollywood Burn’ tells his story through the eyes of all involved but as the mystery unfolds, we are left wondering if anyone will ever come out on top or if ‘Trio’ ever made it to the big screen?

From the perspective of a Jackie Chan fan, ‘Burn Hollywood Burn’ can certainly be labelled as a disaster.  Chan’s presence within this mock documentary is limited to no more than  a few brief appearances in which he demonstrates just how poor his grasp of English was at the time or hams up his tough-guy image to little effect.  There is very little of the Chan we know and love on display and if anything, it feels like nothing more than another example of the typical stereotypical Hollywood image of an Asian actor as the new Bruce Lee.  With this in mind, it’s difficult to see exactly why Jackie would have chosen to appear in this movie other than as a favour to his friend, Sylvester Stallone, as it was never likely to further his career in the U.S. and on paper it can’t have been a very appealing idea. To put it simply, there’s no action, no acting and no real contribution from Chan the man so fans should be well aware that there is little to be taken from this movie other than an opportunity to complete your collection.

The presence of Chan aside, ‘Burn Hollywood Burn’ still proves to be an unsatisfying piece of cinema.  During the opening segment it is possible to see what the producers were hoping for with some successful satirical jabs at the Hollywood filmmaking process, but it soon becomes apparent that the picture is losing its way.  With the introduction of stars like Coolio and Chuck D, the story develops into a farce, moving away from its original intention and choosing to opt into the crude joke department with a ridiculous and far fetched tangent to the plot.  The film is also filled with just far too much mundane talking for it to appeal to the average moviegoer as it ploughs through numerous interviews with cast and crew that soon become tiresome and repetitive, wasting the talent of most of the recognisable actors.  As a final demonstration of just how disappointing this film is, it’s somewhat ironic that the actual director chose not to put his name to the movie (although we have listed him here) and labelled it as an Alan Smithee directed film which shows that even he was unsatisfied with his final work.

Overall then, this is certainly not a film that I would recommend to the average Chan fan.  There are a few (and I mean a few) nice ideas but it’s certainly not intended as a showcase for Chan as there’s very little screen time for the world’s most famous action hero, and what time there is would probably have been better spent elsewhere.