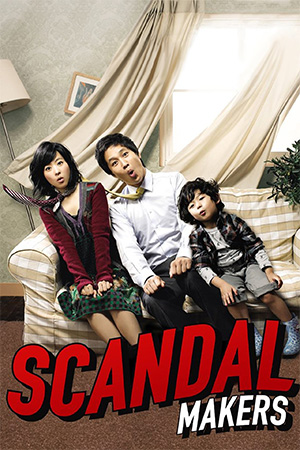 In an ideal world, any film that was acclaimed as being Korea’s most successful comedy of all-time would be an undeniable classic, a work of quality that deserved its copious amounts of box-office Won. The realisation that this cinematic utopia does not exist was confirmed for this reviewer when the asinine ‘200 Pounds Beauty’ held this aforementioned title for three years. Mercifully last year saw director/writer Kang Hyeong-chul’s debut work, ‘Scandal Makers’, conquer its rival and sit at the top of the list of bankable comedies.

Radio presenter Nam Hyeon-su (Cha Tae-Hyun) is the caring, sympathetic presenter of an enormously popular programme where he dishes out sensitive advice regarding relationships and families; one such regular caller who receives this expert counselling is young mother Hwang Jeong-nam who is searching for her errant father.  As soon as he’s off air though, Nam becomes the solipsistic egomaniac he really is, spending time enjoying his luxurious lifestyle while keeping a convenient distance from the ordinary people.

Nam’s self-indulgent life is capsized when regular caller Hwang appears on his doorstep, claiming that he is in fact the father she has been looking for. And she has brought along her young son, making Nam an overnight grandfather. He initially rebuffs these revelations, but the DNA test proves it to be the truth and the slick radio personality faces a battle to keep the scandal away from the press.

Take an established equilibrium and throw in some incongruous presence, then watch for 90 minutes or so. That little recipe has been well used by cinema with ordinary lives changed by a baby, a dog, a long-lost sibling, a special power – basically anything the makers can think of. ‘Scandal Makers’ doubles its chances by giving its anti-hero not one, but two new distractions and making him a younger character than the story would usually deserve. Despite this, the Korean hit is about as easy to predict as a two horse race when one of the participants has one leg and severe agoraphobia. Yet the charm of ’Scandal Makers’ is never intended to be this rather obvious machination of farce.

This comedy succeeds because of its wit and characterisation, two attributes that go hand-in-hand in the better efforts of the genre. Cha Tae-Hyun is effortlessly charismatic in nearly every film he appears in and in ‘Scandal Makers’ he makes a rather obnoxious character quite endearing – he’s so ludicrously self-absorbed that he is impossible to completely reject. Naturally the audience gets to see this patrician taken done a few pegs by the chaos that ensues and then begin to appreciate the family around him.

Unlike the majority of Korean rom-coms, ‘Scandal Makers’ is also careful not to outstay its welcome. Not that a few minutes couldn’t have been shaved off here and there – we still seem to get more over-ripe endings than is absolutely necessary. Nevertheless, to see it ending comfortably before the two hour mark is a sign that its director/writer Kang Hyeong-cheol knows how to crack a walnut without the proverbial sledgehammer being employed. ’Scandal Makers’ has enough cheerful moments and well apportioned slapstick to ease it through any of the weaker portions. It may not leave an indelible smile permanently etched on your visage, but it is a rather pleasant comedy that deserves its plaudits far more than the film it just replaced as Korea’s biggest comedy.