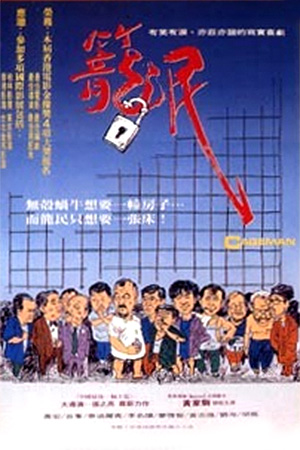 ‘Cageman’ follows the varied residents of a ‘low-income housing building’. The said habitation is, quite simply, individual cages for these men who are struggling to scrape together a living while the city ignores their squalid existence. Each tenant has their own reason for being in their cage and their own sense of pride and dignity: Tong (Robin) is a seller of fraudulent medicines whose gambling has left him with virtually nothing; Koo (Chiao) is the unofficial spokesman for the group who looks after his mentally-challenged son (Liu Kai-Chi); ‘7-11’ is the oldest resident, never leaving his cage yet helped by loyal friend Sissy (Wong) who lives below him; Taoist is the philosophy-spouting former teacher who has fallen on hard times.

Though these cages are far from ideal living conditions, they keep these assorted men off the streets and provides a sense of family they all desperately need. When the landlord decides to sell the building, the lives of the cage dwellers is thrown into turmoil and they attempt to utilise the local media to hear their sorry case. The machinations of big business are never far from the surface though and soon the residents realise they are facing insurmountable odds.

Jacob Cheung’s celebrated drama is that magical juxtaposition of gritty social commentary and absorbing character study that many lesser directors aspire to replicate. From the opening frames, through the introductions of the main protagonists to the poignant displays of friendship in the least salubrious of conditions, ‘Cageman’ is completely riveting.

‘Cageman’ is acted impeccably, of that there can be no doubt. Certain performances such as Liu Kai-Chi’s garnered awards and rightfully so. Yet the impact of the film is in no small part thanks to the tremendous ensemble cast that’s assembled. Within these ranks are Victor Wong, usually associated with Hollywood productions but flawless as ‘Sissy’ and notably Teddy Robin as the conniving Tong. Each piece of the thespian jigsaw slots together with finesse, meaning that the dramatic heart of the film never skips a beat.

Some may point out that the staged setting is more suited to theatre than cinema. To some extent this may be true, but like works of cinema that excel just using a mere few sets (‘Twelve Angry Men’ springs to mind) ‘Cageman’ is never hamstring by apparent restrictions. Indeed the story has more gravitas with such direction, the viewer feeling increasingly caged in this world like the protagonists.

Social realism has rarely been handled so cogently and so compassionately.