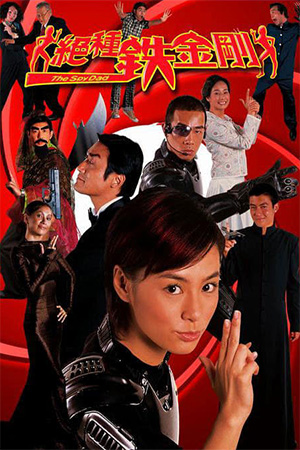 A wonderful, life-affirming thing happened to me while watching ‘The Spy Dad’. Though the dvd box stated that the film ran to nearly two hours, it actually finished a good twenty five minutes early. Not that ‘The Spy Dad’ is that much of a gruelling experience – it certainly causes less cerebral damage than many of Jing’s efforts. Yet the prospect of sitting through nearly thirty minutes less Jing lunacy than expected is surely better for you than all the good bacteria in the world.

Action star James Bon (Leung) lights up the screen with his debonair charm, bravery and ability to defeat evil. Away from the screen though, the actor is a cowardly divorcee who struggles to relate to his sprightly daughter (Chung) and the world she lives in. An opportunity to address the gulf between his real life and his on-screen persona presents itself when an Interpol agent (Chan) stumbles into his home having been poisoned by a gas that reverts victims back to their childhood. When the terrorist responsible for the attack sends his minions after the agent, Bon, his daughter and dopey brother-in-law (To) come to the rescue.

Rarely is there the expectation of any surprises when watching a Wong Jing film; a scant storyline that exists just to act as a framework for all manner of movie spoofs, low-brow jokes and insane babbling. Nevertheless, the criterion for judging whether a Wong Jing film of this nature has been a success is whether or not it is tolerable and just what long-term damage it is expected to cause. ‘The Spy Dad’ is entertaining enough to be considered one of the better Jing films of recent years though that in itself appears to be feint praise. Though patchy and at times as annoying as hearing nails being scratched down a blackboard while being hamstrung, there are moments of bizarre invention that actually come of. A few early jokes about the two Tony Leungs help get the ball rolling while the numerous parodies provide a moderately impressive hit-to-miss ratio. A few neat ‘Matrix Reloaded’ lampoons come off quite well and show that perhaps the Wachowski Brothers’ woefully bloated ‘Matrix’ sequels could have been completed at a fraction of the cost.

‘The Spy Dad’ appears to have been great fun to have made if the exuberance of the stars is anything to go by. That level of enjoyment may not fully transfer to the viewer, but it does mean that the film chugs along at a fairly consistent pace. I did notice my skin peeling off as the film neared its conclusion, though on closer inspection this seems to have been what doctors call ‘The Chapman To effect’. Nevertheless a few solid jokes, the chance to see Tony Leung Ka-Fai away from the arthouse productions he is currently focused on and some surprisingly slick action offers an adequate cure.