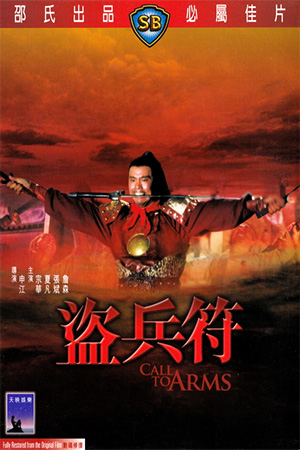 During the period of the Warring States, 257BC, anti-Chin forces led by Prince Shun Ling (Chung Wah), of the Chao State, work upon a plan to form an alliance with neighbouring Wei State to stave off their invaders. Duped into assassinating Chao official Su Song (Yeung Chi-Hing) by Wei Imperial Guard Bai Chi (Ho Wan-Tai), heroic swordsman Zhu Hai (Cheung Ban) uncovers the deceit at last minute temporarily averting disaster. However, Bai Chi carries out the mission when Zhu Hai errs but is condemned to the slave camps for his loyalty, and has his tongue removed to boot.

Needing their neighbour on their side, Song’s daughter, Su Yu Jiang (Hsia Fan), is promised to the Prince of Wei (Chan Shen) as a cover for the prince to steal the state’s coveted military tally to unite the states. The only drawback of the plan is that theft of tally carries the death penalty, and even then it may not be enough to quell the advance of the mighty armies of Emperor Chin (Cheng Miu). With Yu Jiang taking sole charge for the tally’s loss, it’s up to Shun and Zhu to ride across the border and enlist the aid of General Jin Bi (Wang Hsieh) but danger faces them at every turn.

From the dab hand of ‘Swordswomen Three’ (1970) and ‘The Rescue’ (1971) director Shen Chiang one would obviously expect an enjoyable martial arts romp of the calibre of those films, spiced up with some heady political intrigue, of ‘Call to Arms’ (1972) but sadly it’s not to be. Immersing itself in a script, by Shen and Hsu Li-Min (‘The Rescue’, 1971), bogged down in the political trappings of the Warring State era of Chinese history ‘Call to Arms’ ends up a lot further disconnected from its audience than many of its peers. Though there are some energetic sword-fighting sequences, choreographed by (now legendary) brothers Yuen Woo-Ping and Yuen Cheung-Yan which intermittently punctuates proceedings, high court drama and governmental intrigue is the name of the game herein. And while the various primary characters are going through their highly theatrical deliveries of the varied intricacies of the plot, I’m sure there will be many out there like myself that find these passages monumentally banal and end up only serving to stall the narrative to a stand-still.

When the action does pop up, amidst the many catatonia-inducing stretches of endless babble, it’s at least lively enough to keep the viewer engaged and just as graphically gory as one would expect of a Shen Chiang film (see ‘The Rescue’ and ‘Heroes of Sung’ for further blood-splattered evidence). In addition, the swordfights are mercifully punchy and brief with countless henchmen spinning around into frame with all manner of gory wounds or hosing blood to shock and/or delight the viewer. Limbs are lopped off, heads separated from bodies, showers of blood from the Shaw’s patented blood-bags (which simply required actors or extras to squeeze tightly with a free hand out-of-shot for maximum effect) splash the indoor sets and, in the film’s gory highlight, a villain is run through with a giant spiked metal hammer. Of course, it would all be terribly thrilling were it not for the fact that the story and characters are overall such deadening bores.

Even the gratuitous censor-baiting sex scene fails to titillate since it is almost as bizarrely abstract as the one that opens Robert Young’s ‘Vampire Circus’ (1972) (where faces and naked flesh roll in and out of shot from all corners of the frame) as well as shot and edited to hide the fact that leading lady Hsia Fan has been extensively (body) doubled. On the other hand, you know you’re in trouble when a production introduces the mighty Bolo Yeung late in the game and proceeds to do exactly nothing with him. At least in Shen’s previous ‘The Rescue’ Bolo got to flex his muscles and die the glorious, gory blood-drenched death of a hero, rather than stand around in the background looking bored. As a bonus, there’s a handful of old Shaw favourites on hand (which should give viewers something to do in the slow spots) inclusive of Tung Li, who headlined the superior ‘The Imperial Swordsman’ (1972) and ‘The Black Tavern’ (1972) who’s reserved the film’s splashiest moment after an admittedly thrilling swordfight with Chung Wah and Cheung Ban.

Though it was initially commenced as a vehicle for Shaw star Chang Yi, of ‘King Cat’ (1967) and ‘The Silent Swordsman’ (1967) fame, who jumped ship in the middle of production to sign with rival studio Golden Harvest once his contract expired, it’s doubtful that even the star-power of Chang could have saved ‘Call to Arms’. As with any major studio, the law of averages defines that not every horse out of their stable is going to be a trophy winner and Shen’s wuxia political thriller is one of the Shaw’s runner-up nags. In fact, at no stage anywhere in its (thankfully short) duration does one get the impression that the film is anything much more than programme filler, as it scarcely aims higher than its modest means and consistently underachieves. But to be perfectly honest, Shen Chiang’s ‘Call to Arms’ is about as dull and listless as they come, never once engaging its viewer even at the most basic levels of entertainment merit, and of that it’s one Shaw film I’d advise passing over in favour of the many better films in their vast library.