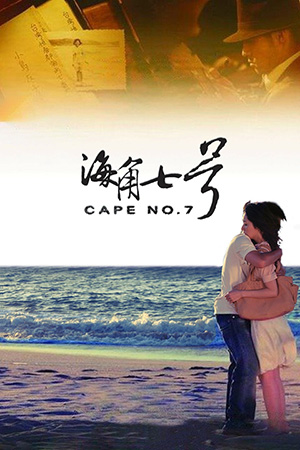 2008 was the year a modest Taiwanese production turned into a national phenomenon, smashing attendances records in Tai Pei and successfully battling the hegemony of big Hollywood hits. ‘Cape No.7’ is the classic example of the power of word-of-mouth, that elusive attribute all producers wish they could utilise. By the end of its run, only that immovable object ‘Titanic’ stood above it in domestic sales and this feat has been duly revered throughout the island.

‘Cape No.7’ is a celebration of the Taiwan of the past and the present, an evocation of the gentle beauty that has a global resonance. Starting with its own aquatic juggernaut, Wei Te-Sheng’s film opens with the romantic writings sent by a Japanese teacher to his beloved as he sails back to his homeland.  The love letters never arrive though and appear some 60 years later in the possession of uninterested postman Aga, a frustrated young musician disillusioned with big city life having relocated to the Taiwanese hinterland. Aga cannot deliver the package of letters due to the intended address no longer existing and so unwraps it, becoming absorbed in the story it evokes.

In the same coastal area is failed Japanese model Tomoko who is used by the local powers to help organise a big beach concert highlighting J-Pop artist Kousuke Atari. She reluctantly becomes involved in the complexities of the event while continuing to balance these with local idiosyncrasies which constantly bubble to the surface. Short-tempered councillor Hong insists on having a Taiwanese support act performing before Atari and auditions get underway in the town, enthusing the eclectic local population. Aga is persuaded to lead the very unusual band – a union of old and young, traditional and international, but finds Tomoko a difficult person to deal with, their respective tension hiding an obvious love for one another.

An often parochial drama, peppered with dashes of subtle humour and amusing sight gags, few could have predicted the success of director Wei Te-Sheng’s first film. Apparently, ‘Cape No.7’ was intended as a quick way to secure financing for the director’s magnum opus ‘Seediq Bale’ – and how; investors are all too happy to support Wei’s big project now. The popularity of ‘Cape No.7’ is difficult for a reviewer unfamiliar with the nuances of Taiwanese culture to grasp, but it is a paean to idealised rural life that every cinematic market around the world will be cognisant of. Whether we are residents of the U.K., U.S. or India, there is something atavistic about these glimpses of life outside the big cities we are used to seeing on the big screen.

Initially filled with short snapshots of the various population of the area, ‘Cape No.7’ settles into a more routine romantic drama as it passes the hour mark. It’s in this second hour that the pace, which was already leisurely, becomes almost statuesque and fails to close the stories off successfully.  The central romance is unoriginal and features two protagonists whose moody swagger is difficult to penetrate – if indeed we really want to bother.  Unfortunately the cornucopia of unusual characters that are subtley crafted in earlier moments are pushed aside in favour of said love story, a fact that is difficult to ignore.

Nevertheless, ‘Cape No.7’ is an ensemble production whose success is tied up with its exploration of Taiwan’s southernmost area, its use of localised flavour and copious amounts of colloquial humour. It’s these ingredients that have been so beloved in its homeland and will perhaps bar it from having quite the same impact overseas. Naturally, films do not create such a vibrant support unless there is something of genuine interest inherent within the story and ‘Cape No.7’ portrays a refreshingly different environment than most modern cinema tends to favour. The cast is packed with newcomers and inexperienced thespians, but this adds some genuine realism while never compromising the professionalism of a big production. Strengths like these are more encouraging to remember than the often listless two hours that never quite achieve their opening potential.