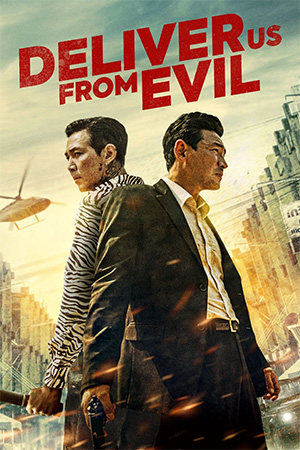 From the writer of ‘The Chaser’ and ‘The Yellow Sea’ and reuniting the stars of the stunning gangster thriller ‘New World’, ‘Deliver Us from Evil’ is a relentless thriller that melds character and action near perfectly. Despite using well worn action tropes as a framework to pit two men against one another, the film spins a refreshing take on these tropes to constantly surprise the viewer and ultimately deliver an emotional wallop. Starting off relatively low key (albeit with a shocking assassination) it sees killer for hire In-nam (Hwang Jung-Min) complete his “one last job” for his employer in order to retire and live the quiet life in Panama. However, it’s never that easy as an old flame calls on In-nam when her daughter is kidnapped in Bangkok. At first refusing to get involved, In-man is then forced to search for the child when events take an even darker turn. Heading to Bangkok in search of the child In-nam must also deal with a relentless killer who goes by the (apt) name Ray the Butcher (Lee Jung-Jae), the brother of the man assassinated in the opening scenes by In-man, who is a merciless killing machine hell-bent on revenge.

So far, so familiar: killer taking one last job, a kidnapped child in need of rescue, and a killer in pursuit to extract revenge are all familiar elements but ‘Deliver Us from Evil’ spins a much more complex narrative that pushes the pursued and the pursuer to their absolute limits. It’s also a film about redemption and how vengeance can all consume, leading to unnecessary death and destruction. But to say anymore would be to ruin the film and the surprises it has in store for a first time viewing. Just when one thinks they have a handle on the narrative it zigs instead of zags and thrusts the viewer down a new narrative path. It’s never in doubt the two leads will clash (and boy do they!) but there is so much more going on in ‘Deliver Us from Evil’ that it’s best to know as little as possible to enjoy the ride and experience the emotional impact.

In amongst all the chasing and carnage there is real emotional stake threaded throughout as In-nam does everything in his power to find the missing child. A child who is put through unthinkable odds which elicits nerve shredding tension as the girl, and In-nam, are thrust into an ever-darker world. Park So-Yi is stunning as the kidnapped youngster and likewise Hwang Jung-Min and Lee Jung-Jae as the two leads are phenomenal, cementing their Korean cinema leading man statuses’. But special mention should also go to Park Jung-Min who plays a pivotal part in proceedings and plays a transgender character, not often given the kind of exposure seen here. It’s a welcome and dynamic inclusion and Park Jung-Min gives an outstanding performance.

Writer and director Won-Chan Hong orchestrates the mayhem with assured aplomb delivering some brutal knife fights, gunplay and come the finale full-on chaos meaning the action really delivers. Down and dirty the action is sharply staged and escalates in extremity as the film progress and the protagonists plight reaches fever pitch. Yet the action never overshadows the character work, the thriller element, or the emotional core of the film. Mention should also go to the score with propels the action and mounts the tension expertly and is one of the best scores of recent memory.

The action, certainly in the second half, perhaps becomes a little too outlandish somewhat at odds with the more grounded sequences seen earlier in the film and there are a few instances of convenience and happenstance in order to keep the plot moving but these are minor niggles (that will only irk the majorly critical!) for what is a near perfect concoction of thriller, action and emotional character work. A dark thriller and an exhilarating action film, ‘Deliver Us from Evil’ is one of the year’s best.