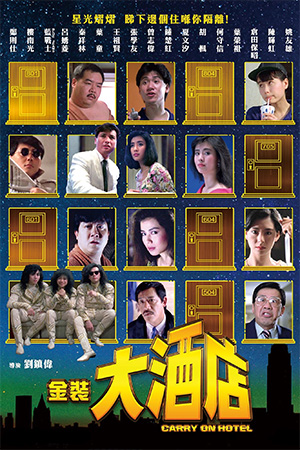 Comedy director Jeff Lau takes the helm for this series of loosely related vignettes that centre on a plush Hong Kong hotel. Naturally, as this is a comedy from the late-80s, there are the usual assortment of familiar faces and character performers; Richard Ng and his fellow ‘Lucky Stars’ cohort Eric Tsang are thrown together with well-loved actresses Joey Wong and Cherie Chung to create a star-filled cast.

The series of stories opens with the visit to the hotel of a jealous rival (Kent Cheng) who is keen to investigate the hotel’s success. After these brief introductory scenes, the focus then reverts to the hapless viewer’s of the hotel’s video surveillance system who are take an interest in the interaction between two characters who’d prefer to remain anonymous. Meanwhile an expert thief (Ng) is mistaken for the hotel’s rich financial backer and, while he’s treated like a king by the staff, plans to rob the contents of the main safe. Then an unfortunate travel guide (Tsang) finds himself the object of affection for a beautiful, yet disturbed stalker – only to have her ‘counsellor’ join in the attempt to kill him. The compilation ends with a tale of unrequited love as a tomboy mechanic (Yip) puts aside her own feelings for her colleague (Cheung) in order to help him chase one of the hotel’s beautiful guests.

As the description implies, ‘Carry On Hotel’ combines very broad comedy, darker mystery overtones with a closing story of romance. Such a massively contrasting mix would take a film-maker of Kurosawan proportions to produce a classic – alas, Jeff Lau is not such a man. While comfortable with keeping the proceedings moving without losing the viewer, Lau  struggles when it comes to consistency and pacing. The first twenty minutes are particularly arduous with two very uninvolving stories taking centre stage and hardly inspiring the viewer – things improve with Richard Ng’s introduction and the closing two stories. The beauty of such an episodic format, though, is that Lau can afford to have a few of the scenes fall flat while compensating for better quality chapters at the end.

‘Carry On Hotel’ should work better than it does, but, due to uninspired writing and direction, is merely passable entertainment.