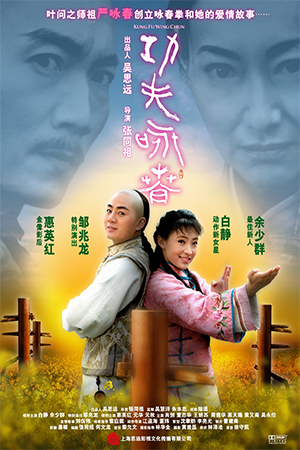 With Wing Chun the kung-fu style de rigueur of Hong Kong cinema, it was only a matter of time before another attempt at explaining its genesis came to the screen. Yuen Woo Ping’s ‘Wing Chun’ was nearly twenty years ago and, while a fun flick in its own right, was as much an accurate rendition of the story as ‘Carry On Up The Khyber’ was.

Obstreperous young woman Yim Wing Chun (Bai Jing) lives with her father and helps out at the restaurant he runs by himself. Her headstrong manner manages to scare away an arranged suitor, get her in trouble with her family and gain the unwanted attention of the cocky son of a wealthy local businessman. To deal with the last of these problems Yim begins to develop her own kung-fu style under the tutelage of a nun (Hui Ying Hung) who has just arrived in town. The other difficulties are quickly resolved, but a far greater threat emerges when her fighting style is noticed by a travelling Ching agent who links it to the runaway rebel nun. The Ching forces begin to close in on the town and deal mercilessly with anyone considered a traitor, leaving Yim with major decisions to make.

Has any film in the history of the medium been improved by adding cartoon-like noises to pratfalls and childish slapstick? Perhaps there is an example somewhere, hidden in a cinematic Area 51, but it’s probably not a film that is primarily within the action genre. Weak comedy has long been the bane of the kung-fu flick, yet the opening thirty minutes ‘Kung Fu Wing Chun’ manages to make even the most insipid examples look perfectly-balanced in comparison. The first half hour is packed with toots and hoots every time someone does something ‘humorous’ – and then Yuen Wah and Yuen Qiu roll into the film in their 702nd comic pairing since ‘Kung Fu Hustle’, so things will not be improving anytime soon…

And then, just before all hope is lost, Joe Cheung’s film gains its footing and becomes a decent – though never incredible – kung-fu film. This is achieved by a change in tone as the story gradually becomes darker, much less frivolous and the grating characters grow as a result. Cheung is a director who has more than handled both comedy and tragedy in previous films of a varied career, but it’s definitely the latter that redeems what was in danger of being another ‘Choy Li Fut’ or worse. With the drama comes a great upsurge in the quality of the action too with Tung Wei and Guy Lai injecting some genuine hard-edged Wing Chun into the last thirty minutes.

‘Kung Fu Wing Chun’ clearly has the intention of being like Jet Li’s ‘Fong Sai Yuk’ – a comic martial arts film that suddenly changes tone though remains consistently entertaining throughout. Joe Cheung’s film just isn’t in that league though. After an appalling first half, perhaps we can be grateful that it at least becomes watchable. A recently rejuvenated Hui Ying Hung and cute newcomer Bai Jing deserve better than this curate’s egg of a production, yet let us count our blessings that we can even use this metaphor considered the uphill struggle it creates for itself.