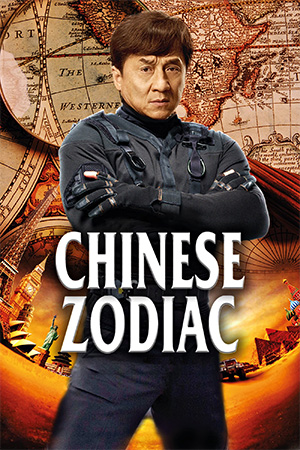 A 21st century reboot for an action character known for plundering relics and derring-do in a variety of exotic locations worldwide, all played by the original actor now approaching veteran status – ‘Indiana Jones & The Kingdom Of The Crystal Skull’? Thankfully not. That said, ‘Chinese Zodiac’ – or ‘Armour Of God III’ as it might be helpful to call it now – gives Jackie Chan fans (including me), who had been awaiting its arrival especially eagerly, very little to get excited about.

The 12 bronze heads of the Chinese zodiac, plundered by colonial forces during the tumultuous end of the Ching dynasty, are gradually being acquired by philanthropists worldwide with the aim of returning them to their rightful home. An organisation that specialises it finding forgotten objects of antiquity and stolen art eyes a healthy profit if it can find the final few animal heads and so turns to legendary adventurer J.C. (or Asian Hawk or Condor or Jackie Chan) to track them down. J.C. and his team pose as journalists for National Geographic in an attempt to gain the trust of a voluntary organisation with vital information, but discover that the remaining bronze heads were lost in a shipwreck over a century ago. However, an ancestor of one of the crew gives J.C. a lead that looks to not only open the truth about the disappearances of the items, but also reveal the agenda that J.C.’s employers are keen to keep hidden.

I still vividly remember leaving the cinema having just watched the last Indiana Jones, shaking with a mixture of apoplectic rage and self-pity at seeing one of the great Hollywood trilogies violated in such a brazen way. ‘Chinese Zodiac’ did not fill me with such impassioned vitriol nor did it really stir anything within me; the tinge of sadness was there, but the sheer blandness on offer poured itself over me like molten lead on a radioactive spill. Without sounding like the old curmudgeon I am clearly becoming, ‘Chinese Zodiac’ is the epitome of the 21st century blockbuster, a money-loaded wedge of computer effects and soul-sucking banality (obviously with a few notable exceptions). Gone are the physical set-pieces and the celebration of the imagination, the thrill of seeing things that genuinely astonish.

Having descended from my soapbox, I can at least remark that ‘Chinese Zodiac’ does feature a few snappy moments that roll back the years for Chan. The all-too-brief fight with Alaa Safi is a highlight while the battle with a number of assailants in a photographic studio once again shows that wonderful use of props that Jackie Chan is known for. Even during the confused finale, where J.C. fights in mid-air, there are occasional flashes of better recent cinematic moments for the Asian superstar.

With solid moments hidden in such a bland experience, ‘Chinese Zodiac’ is not an utter disaster, but it surely flatters to deceive during its better scenes. The narrative is padded with a trite sub-plot about the impending divorce of two of the characters and supporting actors (with the exception of a sprightly Laura Weissbecker) add nothing of value to the film – not a problem if Chan is the sole focus of the camera, but quite problematic when they are expected to hold our interest. The little allusions to previous chapters of the series and past hits like ‘Young Master’ only compound the feeling that ‘Chinese Zodiac’ is another modern example of money being thrown at a production in lieu of creativity. 3 stars, but only because of my admitted bias towards Jackie Chan.