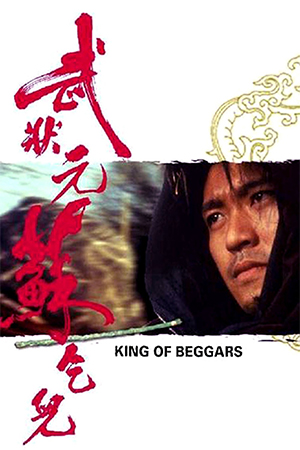 The team behind the monster hit ‘Fight Back To School’ – Stephen Chow and Gordon Chan – once again combined for this foray into period comedy. After dominating the box-office charts for the past two years with his own brand of modern day comedy, it was little surprise that this switch in setting proved to be another big success.

As the eponymous ‘King Of Beggars’, Chow decides to tell the story of another popular Chinese folk hero, Beggar So. Here the film opens with Tsan (later to be Beggar So) as the arrogant and spoilt son of a wealthy general (Ng Man-Tat). There are few things that need trouble Tsan as he ambles through life and relies on the connections of his revered family line. A new direction is taken in his life when he meets a beautiful woman (Cheung Man) at a nearby brothel and decides to pursue her love. This mysterious lady is actually a rebel whose aim it is to take revenge on an evil warlord who frequents the house of ill repute. When Tsan interrupts her attempts, the affluent young man is told to prove himself to his new love in order to win her respect. Having this challenge thrust upon him gives him the incentive to move his entire household to the capital and make his name in a tournament that combines various disciplines. All seems to go according to plan until it is revealed that Tsan has cheated in his written exam and is in fact illiterate. Instead of the expected execution, the emperor is persuaded to spare him and strip Tsan and his father of all their assets, then force them to beg on the street. These two new beggars find the realities of life on the street to be harsh and Tsan begins to lose all of his self-respect. When a wandering beggar appears to bless him with remarkable fighting skills, the reluctant hero is appointed king of the beggars clan and sets out to rescue the woman her loves from the awesome foe.

For many Eastern audiences, Chow can do very little wrong. However, his brand of comedy hasn’t always translated well and some of his bigger hits remain confusing to casual viewers. ‘King Of Beggars’ proves to be a very unusual mix of action and comedy that was loved by the former, but still didn’t hit all of the targets with the latter. There’s certainly moments of genuine humour and, although there isn’t any deep belly laughs on offer, the film is constantly engaging. The real problem of ‘King Of Beggars’ is that there is a lack of focus on what should be the main strength of the production. For a comedy there simply aren’t enough truly funny moments through the duration – this isn’t just a problem of translation either. The action is often very well done, but again if this is the focus, why is the eventual climax between Chow’s ‘Sleeping Fist’ and Tsui Siu Keung’s powers so disappointing. Director Gordon Chan doesn’t have the measure of control he had in ‘Fight Back To School’ and this is very apparent during the film.

‘King Of Beggars’ still has much to enjoy though. There are the aforementioned moments of entertainment from the humour, action and surprisingly the drama. Indeed the degradation of Tsan is handled with genuine pathos and remains one of the feature’s plus points. This is also a visually superb production that offers a real feast for the eyes. With all of this understood then, ‘King Of Beggars’ is certainly not a classic, but is still solid viewing.