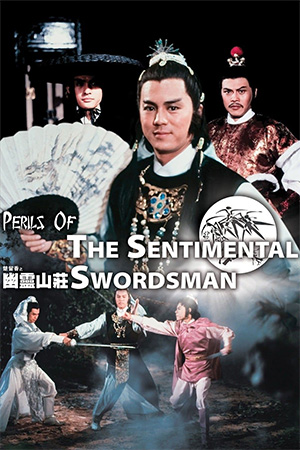 From Hong Kong, unofficial home of the unrelated sequel, comes ‘Perils Of The Sentimental Swordsman’, a production that has absolutely nothing to do with the well-known ‘Sentimental Swordsman’ films. This, instead, is a follow-up to ‘Clans Of Intrigue’ and ‘Legend Of The Bat’ with Ti Lung reprising his role as swaggering hero Chu Liuxiang. That connection may not be logical, but then again the worlds created by writer Gu Long aren’t exactly founded on lucidity and pragmatism as it is.

Hero for hire Chu Liuxiang is given the task of assassinating a supposedly corrupt prince and seems to be more than capable to carry out the grisly job. The plan, though, is a devious set-up and Chu finds himself on the run from the prince’s forces and a legion of paid killers. His one hope is to flee to the noted refuge of the fugitive, ‘Ghost Village’, where wanted men from around the country can lodge safely. Entry into the shrouded society is notoriously difficult, but Chu befriends a criminal who secures both of their passages into the realm. Once there it soon becomes evident that this strange concoction of gamblers, killers and runaways is more than just a retreat for ne’er-do-wells and cut-throats. Chu’s arrival starts to ignite the interest of the residents and he finds more than a few are keen to collect the bounty on his head. Yet Chu starts to uncover the truth about the masked leader of ‘Ghost Village’ and the real reason behind the existence of the agglomeration of fighters in the area.

To the casual viewer, a Chor Yuen/Gu Long film must be like trying to wash your hair in a cement mixer; you might expect a complicated, Chandler-esque storyline, but nothing is likely to prepare you for the avalanche of twists and turns that awaits you. Nevertheless, despite having a reputation for baffling complexity and intrigue that verges on self-parody, the combination of writer, director and star is often more rewarding than it sounds. Often it is the sheer absurdity married up to Chor Yuen’s eye for arranging the mise-en-scene that makes such works strangely captivating despite their parochial nature.

‘Perils Of The Sentimental Swordsman’ is initially hampered by the fact that it has no connection to the first two ‘Sentimental Swordsman’ films, a couple of the finest, most intelligently constructed works to come out of the Shaw Brothers’ stable; the sense of melancholy that sweeps over when it is realised that there will be no association with them is tangiable. This is a swordplay film with as much confidence as its hero though, despite its inability to match the works that the title alludes to. Ti Lung is never less than magnetic when he is posturing arrogantly and picking apart the villains’ plans with cheery brio. He is yet again assisted by the dependable Lo Lieh who always excels playing anti-heroes whose motives are as cloudy as many of the elaborate indoor sets used in the story. The action is the usual stylised sword-fighting with that added twist of fantasmagoria that the Gu Long universe embraces, but this is never really the main selling point of a film of this nature. The real draw, and the skill of Chor Yuen, is to make an ensemble of eccentrics, oddball antagonists and superheroes appealing and a means of covering up the unapologetic holes in the narrative. Such details may make for an acquired taste, but these cominations of Ti Lung, Chor Yuen and Gu Long have a cherished place in the pantheons of Hong Kong cinema.