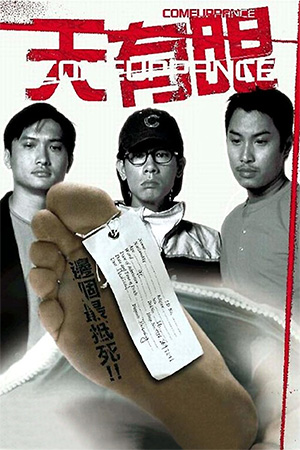 One of the pleasures of being faced with a film from the Milkyway stable is that you’re never quite sure what you’ll get. In 1999 the company’s outstanding productions were the box-office hits ‘Running Out Of Time’ and ‘The Mission’, both of which were also huge critical triumphs. Then the year 2000 brought the romantic comedy ‘Needing You’ to theatres and gave the local film-making economy another monster hit. Also made in that year was ‘Comeuppance’, a crime drama that again shows how Milkyway Productions never regurgitate previous successes for their audience. Instead they take pride in the variety of the films that have their logo.

When a major crime boss is poisoned in a local bar, the police are called in to make some kind of sense of the incident. Michael (Sunny Chan), the officer in charge of the investigation, quickly perceives that the poison used was cyanide and then begins to probe deeper into the crime. The mystery surrounding the murder inspires newspaper reporter Hak (Jordan Chan) to write a series of fictional articles based around a vigilante poisoner. These articles gain a cult following around Hong Kong and count the killer himself as one of its regular readers. The killer, Sung (Tam) is strangely similar to the fictional version; both are fairly harmless individuals who are persuaded into this law-breaking lifestyle by the prevalence of crime in the city. As the police appear to be clueless as to who could be responsible for the murder, Sung finds himself targeting other triad leaders and utilising the techniques he’s reading about in the newspaper serial. Michael and Hak begin to see a pattern emerging in the next few poisonings and agree to pull together their resources to catch the murderer. However, the underworld are also keen to find their hunter and mete out their own punishment.

It’s not an easy task comparing ‘Comeuppance’ to any one specific film; the minimalism and black humour evident in the film recalls ‘The Mission’ and the well-plotted, gradual pacing tends to mimic ‘Clean My Name, Mr. Coroner’, but this excellent feature is quite unlike either. There is hardly any action in the traditional sense of the word and it therefore differs quite radically from other Milkyway productions. In its place is a tightly written screenplay, solid direction from Derek Chiu and an impressive set of characters. Each of the three main characters are created in a subtle manner which means that, despite their differing backgrounds and motives, each is sympathetic on screen. Praise for this needs to be given to director Chiu for allowing the running time to develop this quality and the trio of watchable actors that make this vision reality. Jordan Chan is on fine form as the nervy journalist Hak; Chan shows once again how versatile he can be and how he remains a firm hope for the Hong Kong film-making future.

Having given necessary credit to the director and leading players, it is still challenging to think of what makes this such an absorbing film. The style and substance of ‘Comeuppance’ are in well-balanced equilibrium as neither overtakes the other, but there is still something indefinable that proves to be obvious by the time the credits roll. Although not easy to describe, this is a quirky gem that is definitely recommended viewing.