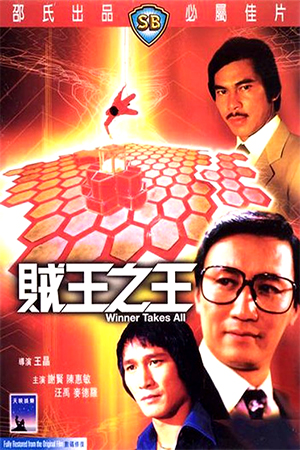 ‘Winner Takes All’ is a perfect example of the two sides of Wong Jing’s cinematic personality: on the good side we have an admirable imagination that throws endless intriguing ideas onto the screen; the bad, and unfortunately more common side shows his lack of restraint and his needless foray into low-brow humour and plunder of other films. With Jing making this film under the Shaw Brothers’ banner, the resulting effort was always likely to be an interesting experience.

A series of well-organised, but ruthless robberies are committed throughout the city and one name is immediately connected to it: superthief Shi Ka Lok (Tse). However, Shi has turned his back on a life of crime and uses his sublime skills to test security systems for wealthy clients. The police try to connect Shi to the robberies as does ambitious junior detective Kwan (Yung Wang Yu) who sees the chance to capture the suave thief as a way out of his office drudgery. However, the real brains behind the crimes is mysterious Japanese businessman Mr. Miyamoto who secretly bares a grudge against Shi Ka Lok. While Kwan finds his plans foiled, he begins to discover that his target may actually be innocent and that the only way of finding the real villain is with Shi’s help.

Borrowing heavily from the fun, gadget-driven caper classic ‘Aces Go Places’. ‘Winner Takes All’ is the Shaw Brothers’ answer to the monstrous success of Cinema City’s output at the time. Utilising the sheer energy of its inspiration, there’s also an attempt to combine it together with the popularised gambling antics of ‘Challenge Of The Gamesters’. While, at its best, ‘Winner Takes All’ takes these elements and creates a heady blend, there are obvious chasms in the general consistency that harms the overall mark. First of all though, the positives…

Love him or loathe him but when Wong Jing’s imagination is on song then the screen is ablaze with invention and outrageous choreography. ‘Winner Takes All’ has enough moments of genuine excitement to keep the weary viewer going through the less active moments; from mahjong playing robots to a wacky double yoyo vs. double nunchuka battle, there’s a great deal to applaud here. Using the insane mahjong contortions and moves that he would later bring to ‘God Of Gamblers’, Jing makes these potentially uninvolving scenes watchable. ‘Winner Takes All’ has a cast of faces from the plethora of Shaw Brothers’ genres and eras – Yung Wang Yu plays his role with the swagger of Fu Sheng, while Patrick Tse has a suave air that pre-dates the explosion of Chow Yun-Fat’s persona. Such a varied cast helps inject some plausibility into a potentially ludicrous storyline.

Unfortunately, just as you find yourself warming to his style, Wong Jing falls prey to the failings that would long be associated with him. ‘Winner Takes All’ has memorable moments, but drifts away from the main premise and gets stranded in needless farce routines. Sucking the excitement from the narrative, such awkward interruptions only highlight Jing’s lack of control in the director’s chair. There’s also the obligatory humour that mostly annoys; though there’s some moments of mirth here, there’s far too many corny, infantile and sub-‘Carry On’ jokes to make this an easy ride. It’s a crying shame that the scenes of real promise are juxtaposed with the usual Jing-isms.

Though it tries to emulate the overall magnetism of ‘Aces Go Places’, ‘Winner Takes All’ is left wanting. Whereas ‘Aces…’ managed to combine sharp humour with a plot that, while far-fetched, worked very well, Wong Jing’s efforts simply cannot match these qualities. Therefore, while it’s certainly a worthy purchase for anyone seeking something a little different, it’s by no means essential viewing.