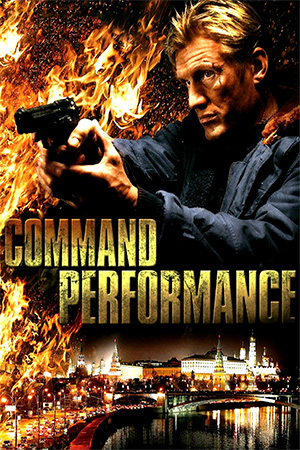 Dolph Lundgren is an action movie star who is often mentioned in the same breath as the likes of Arnold Schwarzenegger and Sylvester Stallone. Whilst I’m not entirely convinced that he is quite in that league, it is fair to say that he is a fan favourite who has appeared in a number of entertaining action movies. Now in his 50s, Dolph is clearly looking to the future and has started writing and directing his current crop of films. His latest, ‘Command Performance’, has received quite a bit of positive publicity so I decided to see if the sturdy Swede was still capable of mixing it with the big boys.

A seemingly harmless Moscow charity event suddenly turns bloody when armed extortionists take the head lining American pop-star Venus (Melissa Ann Smith) and the Russian President Petrov (Hristo Shopov) hostage. Help is at hand though in the unlikely form of the drummer in the warm-up band (Dolph Lundgren), a California ex-biker who teams up with a young Russian F.S.B. agent to try to save the day. Unfortunately, things suddenly become a lot more complicated when old ghosts from the Soviet Union’s past suddenly appear…

Although the trailer was fairly promising, I’m sorry to say that ‘Command Performance’ is basically nothing more than a disappointing ‘Die Hard’ clone. Sporting all the familiar traits – foreign terrorists, enclosed environment, unlikely hero, friendly cop etc. – the film is so by-the-numbers that it’s embarrassing and just about any idiot will be able to predict the outcome within the first five minutes. As if this wasn’t bad enough, the movie is shot using a jerky handheld camera and relies on some truly awful dialogue being recited by a handful of robotic multilingual actors. Perhaps the worst element of all though is Dolph’s character, a supposedly bad-ass biker (yep, that really is his background) who claims to despise guns because “they kill people”. Ironically though, he then proceeds to kill just about anyone that gets in his path by jamming a drumstick or guitar part into an area of their anatomy. Throw into this mix a very awkward romance with a girl half his age and every woman fawning over his “good looks”, and you’ll soon begin to realise this is just a slice of somewhat self-indulgent crap.

When it comes to the action, I respect the fact that Dolph is still sticking to his movie roots but I think there comes a time when an actor needs to re-evaluate his physical capabilities. Up until now, Dolph has pretty much passed himself off as the powerhouse fighter who triumphs by using strength over speed. Despite still looking in good shape, it’s clear that he is slowing down considerably and he seems to crash into every fight scene looking like a gorilla with a hangover. Whilst this may be excusable if he were fighting the local fat club, it just doesn’t seem to cut the mustard when he is supposed to be wiping out a small army of highly trained soldiers. Without wanting to give too much away (like you really care), the only scenes that really save him from looking completely inept are when he eventually picks up a gun and participates in a few fairly bloody shootouts.

‘Command Performance’ isn’t exactly the worst movie ever, but it is a far cry from the Dolph Lundgren vehicles that we used to know and love. Perhaps it would have received a better reception twenty years ago when we were all hungering for more for ‘Die Hard’ clones, but these days it just seems like another low-budget rip-off.