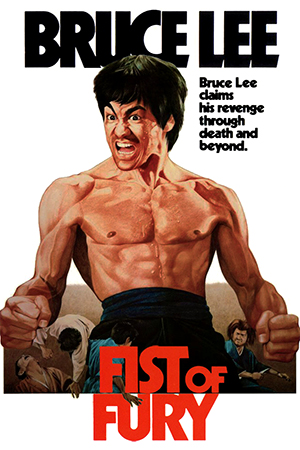 In 1972, a film was produced in Hong Kong in a short space of time and with little money, only to become one of the greatest and frequently imitated martial arts movies of all time: ‘Fist of Fury’. Following ‘The Big Boss’, Bruce Lee’s fame, and position as a hero for the Chinese people, was further increased on release of this classic production, with many (including myself) believing this to be the best of his 4 completed films.

The basic plot is nothing extraordinary, as we see Bruce return to his old school to witness the funeral of his master (and real life historical figure) Fok Yun Kap. Upon arrival, he discovers the extent to which a Japanese school are bullying his own, later uncovering that his teacher was murdered providing the catalyst for a display of Bruce’s trademark rage and revenge.

There are many reasons why this film is a classic. Firstly, it was innovative in terms of its fight choreography, taking giant leaps from ‘The Big Boss’ in terms of displaying Bruce’s powerful and cinematic Jeet Kune Do. The first fight scene in the Dojo is an all time classic and worth the DVD price alone! Also unique at the time was the introduction of an evil Western character as a final reel bad guy. A ploy much used in the 80’s Kung Fu heyday. In terms of direction and cohesiveness, ‘Fist of Fury’ is also the most superior of Bruce’s films as it flows smoothly, at a good pace and brings the best out of Lee’s underestimated acting ability.

Notably, many of Yu Jim Yuen’s Opera School students were called in for much of the stunt work with Yuen Wah having a cameo role as well as playing Bruce’s stunt double. (Wah performed many of Bruce’s flips in his films as a bad back prevented Lee doing them himself). Jackie Chan can also be seen fighting in an early courtyard scene against Nora Miao Ker Hsin, but more importantly was the stuntman kicked through the wall in the films finale, (ending up unconscious!)

In all, this is the definitive martial arts movie. An all time classic which is as good as an all round film as it as a Kung Fu flick. Nobody who is a fan of any action genre should be without a copy of the DVD.