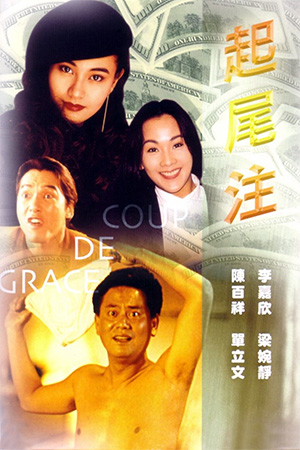 I don’t quite know what inspired me to buy this film; the casting and front cover are hardly inspirational stuff. Nevertheless, ‘Coup De Grace’ is a pleasant surprise from those heady days of 80s Hong Kong, combining genuinely amusing comedy with the kind of action that uses every prop you could imagine.

Fred (Chan) is the hapless employee of a Hong Kong diamond company who is saving up for his future wedding to the beautiful Tina (Reis). To this end, Fred has carefully kept a few diamonds he has acquired to sell on and fund his big day. Unfortunately he is robbed of his stash and now has to confront his fianc?e with the news – knowing full well that her father will only let Fred marry her if he has money. With his dreams in tatters, Fred decides to enlist the help of his sneaky best friend Seng to orchestrate a plan to ‘acquire’ some diamonds from the company he works for. Hatching an ingenious scheme, Fred and Seng use the robbery of the jewellery store as a means to get away with HK$100,000 of diamonds. However, the leader of the gang of robbers realises that the ‘job’ was missing a handful of diamonds and, from there, he discovers that Fred and Seng have them. The pair now find themselves on the run from that gang, the police and Tina’s father who is keen to find out where Fred’s recent windfall has come from.

To most people, Natalis Chan is like Marmite or American Football: an acquired taste that you either love or loathe. Though most people would put themselves in the latter camp when considering Chan, I find myself pleasingly indifferent to him. He can certainly annoy, but films like ‘Coup De Grace’ show that he can also lend a certain dopey charm to a production. Whether trying to court Michelle Reis or attempting to evade the superkicking henchwoman, Chan is in his element and creates a flawed hero the viewer can actually care about. Supporting Chan is Din Laap Man who gives a solid performance even though he is hindered by a particularly offensive haircut. The not-so-dynamic duo are genuinely appealing and pull off the comic scenes with notable kudos.

Yuen Cheung-Yan may not be as experienced a director as his brother, but he certainly knows how to work around the weaknesses in his production. Clearly lacking a capable screen fighter, Yuen tailors the action around the stars and weaves in the highly inventive use of the surroundings. Such an achievement is not to be underestimated; instead of trying to make the leads look like fighters (as he tried to do in ‘Charlie’s Angels’) he choreographs the action in a intentionally raw, yet entertaining way. Make no mistake, ‘Coup De Grace’ is not an award winner or even a genre masterpiece, but its modest goals are easily achieved. Despite the uninspiring opening twenty minutes, this is an action-comedy that is worth sticking with.