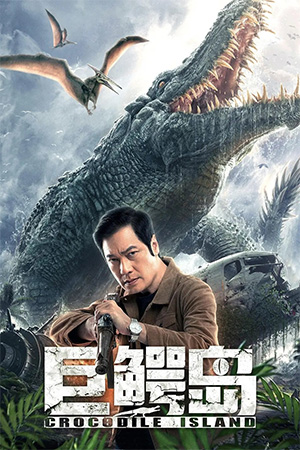 Lin Wei is travelling over the legendary Devil’s Sea with his estranged daughter and an assorted plane load of passengers. There’s the pregnant wife and doting husband, the slimy tycoon who is making a journey for a heart transplant, the spoilt girl who cannot live without social media and the new boyfriend of Lin’s daughter. When electromagnetic interference causes the flight to crash onto an uninhabited island, the survivors are forced to trek to safety through a hostile jungle environment. Yet the surroundings are not nearly as dangerous as the mutated animals that stalk the island and Lin and his fellow travellers have to fight off giant spiders and the eponymous crocodiles.

If you thought that SyFy Channel and Asylum Pictures had the whole low-budget creature feature scene sewn up these days, China gives us web-only film ‘Crocodile Island’, released at the beginning of the COVID crisis. Despite being relatively successful online, it does display the same problems that the aforementioned distributors often show in their efforts. Thankfully, though, it isn’t as desperately woeful as something like ‘Airplane vs. Volcano’!

‘Crocodile Island’ has all of the same disaster movie tropes that one can almost reel off in their sleep. The problem with this is that even an enviable budget and a starry cast fail to hide these cliches; see the recent ‘Skyfire’ for a the perfect example of sound and fury signifying nothing. ‘Crocodile Island’ cannot call on big budget effects and so the story and characters have to be worth watching. Not that the effects are that bad though – they range from the passable to the dreadful. Yet without the support of strength in other areas of the film, the whole spectacle falls flat.

What is slightly frustrating is that there is a way of making such a film successful despite budget limitations. A bit of creativity and imagination with the set-pieces and a bit of tension would make a world of difference. There also has to be some middle-ground between stoic B-movies like this and the wink-wink ironic campness of ‘Sharknado’; see something like ‘Deep Rising’ for an example of getting the tone just right. ‘Crocodile Island’ is deadly earnest which doesn’t quite work when characters are facing spiders the size of a shire horse. Gallen Lo brings the acting chops to the screen and his efforts help as does the short running time. It certainly could have been worse – I think that qualifies as damning it with faint praise.