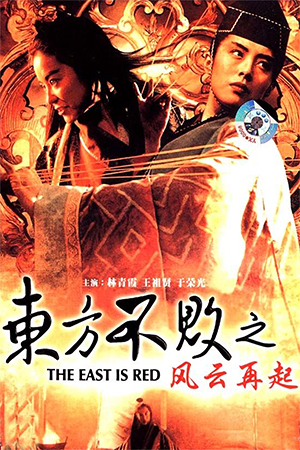 The teaming of director Ching Siu Tung and producer Tsui Hark combines once again for this, the final part of the ‘Swordsman’ trilogy. With the second chapter introducing one of Hong Kong’s most popular characters, ‘Invincible Asia’, it was only natural that the creative forces behind ‘The East Is Red’ would again utilise this winning part of the formula. Therefore Brigitte Lin is called on to reprise the role which gained her a legion of adoring fans and a place in movie history.

After his battle with the Highland clan in ‘Swordsman 2’, Invincible Asia – the unisex villain/villainess – is presumed dead. When a group of Spanish explorers travel to Black Cliff, the scene of his supposed demise, and search for the almost-mythical ‘Sacred Scroll’ they happen upon a mysterious stranger. The Chinese royal envoys with them soon deduce that the said person could be much more than meets the eye and as the explorers attempt to plunder Invincible Asia’s grave, they too realise this. With an awesome display of power the stranger vanquishes his foes and then reveals himself to be none other than Invincible Asia himself. Koo – the head of the Chinese envoys – tells the supervillain that since his disappearance there have been a number of other persons masquerading as Invincible Asia for their own benefit. Enraged that his reputation has been used by pretenders, Asia vows to clear China of these impostors and regain his rightful place. This task is thrown off-kilter when he then discovers that his old concubine Snow is one of the many fakes that are living off his past achievements. Into this confusion comes a troop of Japanese warriors who are searching for the Sacred Scroll and more Spanish explorers focusing on the same goal. The clash is then on for the rightful possession of the Sacred Scrolls and, more importantly, rulership of China.

‘The East Is Red’ ends the popular series with a visual bang that pummels the viewer relentlessly. Unfortunately the exercise is very much one of style over substance and the overall effect is a bewildering one. Any coherence is lost soon after the half-hour mark as every party double-crosses one another and heroes quickly become villains. In the end there is the feeling that directors Ching Siu Tung and Raymond Lee were far more intent on splendour than any narrative cohesion; the odd plot hole could be forgiven, but ‘The East Is Red’ becomes a long line of cliches that verge on self-parody. The characters are also sketchily drawn meaning that they veer from one extreme to the other and do even more harm to the film’s power.

Although these criticisms are certainly not over-estimated, it is fair to call this a flawed spectacle. Even with these flaws taken into account, this is still a quite mind-blowing barrage of images. With a fraction of the budget that Hollywood productions usually demand, ‘The East Is Red’ is further proof of how inventive the hard-working Hong Kong industry can be. Coupled with this jaw-dropping splendour is the powerful soundtrack that pounds throughout the duration. All fans of the Jade Screen should watch this for these reasons, but also be prepared for eventual frustration as this is a top-heavy film of incoherence.