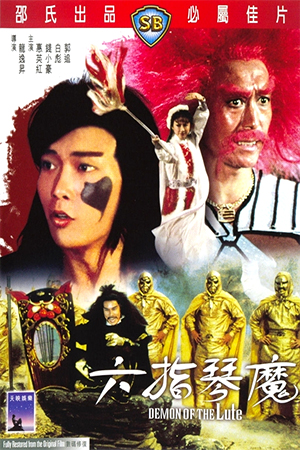 A fabled lute fashioned from the sinews of dinosaurs re-surfaces and leaves the martial world in a perpetual state of dread. The lute itself emits a vicious melody when played, gradually destroying all who are in the vicinity when it is heard (a feeling I can relate to when my wife puts on MTV Base), therefore making the one who owns it all powerful. Unfortunately nobody is quite sure who has acquired this long dormant weapon, but a team of heroes is sent out to stop the rampage before it envelops the rest of the land. Among those assigned to find it are a young weaponsmith, a sprightly female fighter and a father and son partnership. As they piece the evidence together, the multitude of suspects begin to make themselves known.

It’s perhaps ironic that I watched this film on ‘Children In Need’ day; after the insane opening credits we are informed that this film is dedicated to children. Indeed ‘Demon Of The Lute’ shares the same predilection towards making famous faces embarrass themselves for a cause as ‘Children In Need’ does. But whereas the annual charity event throws up weathermen doing routines from ‘The Full Monty’, ‘Demon Of The Lute’ gives us Lee Hoi San with a big red afro (that gives him special powers), a hero with a gigantic pair of golden scissors, a impish young star with one of the most shrill dubbed voice in history, a fight between a hero and an Alsatian drawn carriage (and I do mean the canine variety), dolls emitting fireworks that warn of danger, villains with extending beards and appendages… the list of madness goes on and on. It seems that only kids subjected to constant mental abuse by the array of loud, in-your-face shows of ‘Cartoon Network’ and ‘Nickelodeon’ are likely to escape a viewing of this unharmed.

Hidden deep within the bowels of this infernal locomotive is some half decent action. A few moments are wildly inventive, showing exactly the kind of imagination and vigour that put Hong Kong cinema firmly on the map. These scenes, though, are sunk beneath a barrage of quickly cut fantasmagoria that pulsates from the television like an atomic blast. Even the scenes of dialogue seem to take place at a hastened pace; words are spurted out, answers lashed back, then characters arise with an undercranked spring in their step. All of this amounts to a confusing, exhausting, overwhelming 100 minutes of mayhem.

Mainstream Hong Kong cinema has often embraced the bizarre and the baffling, but ‘Demon Of The Lute’ may be a step too far for many. An all star cast makes matters more bearable as do some colourful moments of inspiration, yet this is a film that very obviously came near the end of the great Shaw Brothers’ period. If all that was needed for an entertaining production was a band of familiar faces overacting for the entertainment of children, this would be a near masterpiece. Most will want a bit more than that to be impressed.