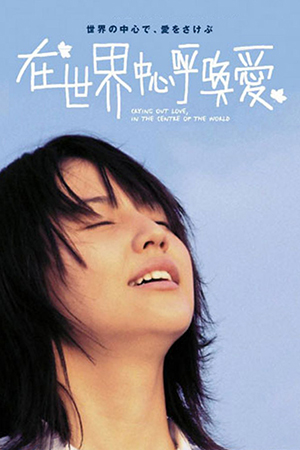 An adaptation of the wildly successful novel, Yukisada Isao’s ‘Crying Out Love, In The Centre Of The World’ is one of the undoubted kingpins of the genre, a grand tear-jerker that has a reputation to leave even the greatest stoicist a gibbering mess.

Sakutaro is drowning his sorrows in a bar run by a school friend. His girlfriend, Ritsuko, has disappeared on a ambiguous pretext and a nagging feeling continues to eat away at him through young adulthood. After travelling back to his old home town in the hope of meeting Ritsuko, Sakutaro is reminded of his first love and how integral it provided to be in his current relationship.

A decade earlier the teenage Sakutaro was enchanted by the new girl in his year, Aki. She was beautiful, intelligent and just a little bit outside of the norm – a kindred spirit for the awkward youth. A friendship between the two evolved into love and each comes to be totally reliant on the other. Communicating through audio cassettes when they cannot meet in person, Sakutaro and Aki tell each other their deepest secrets and the former seems to have mapped out their future for them. Tragedy is not far away though and memories of their last weeks together begin to gnaw away at the reflective Sakutaro in the present day.

Like an irresistible force hurtling towards its destination, ‘Cry Out Love, In The Centre Of The World’ had already built up a following after its massively successful printed run. Translating any work based on literature to screen is notoriously fraught, but Yukisada Isao’s efforts seem to have been appreciated by devotees. As someone unfamiliar with the source material, this reviewer can only comment on its movie debut and with this in mind, it’s good to report that this is the kind of polished production that make any nervous author proud. Whether it’s quite the emotional maelstrom it’s reputation implies is another matter though. In the sub-genre of the tragic love story, the vast array of competition means that the jaded viewer is quite accustomed to the plethora of machinations designed to pull the heart strings. This particular film is predictable in its gradual move towards a poignant finale and certainly has a languid amble getting there.

This is still the kind of delicate drama that has enough of a hook to keep the audience enthralled until the end. At times, it seems as if the narrative has ground to a halt and the story doesn’t know how to finish with the necessary power – every tear-jerking ‘finale’ evolves into another and another until, when the credits do finally roll, we’re not too disappointed to see them. This said, for the majority of the time the characters and their fledgling love are charming enough to draw us towards the tragic conclusion and it would certainly take a heart of stone not to be moved by the second hour. ‘Cry Out For Love, In The Centre Of The World’ is never less than a stark reminder of how Asian cinema knows how to convey love stories with humanity and undeniable pathos.