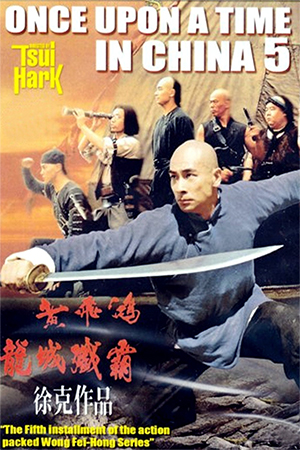 Hong Kong master filmmaker Tsui Hark returns to the ‘Once Upon a Time in China’ saga with this 5th outing, which sees Vincent Zhao taking over the role of the legendary Wong Fei Hung. Although far from being a successful film, it is still worth watching for fans of the series and will help to complete your collection.

All 6 films in the series are set in the late 19th century and usually imply politically themed storylines involving the country militia’s defence against any foreign invasion or gangsters based in China. Whilst sometimes biased, the action-adventure plots do lead viewers away from this to construct fairly enjoyable films, but  just don’t expect anything special from this particular part.

As more corruption occurs from foreign powers or country bandits, we now see Wong Fei Hung and some of his heroic students/relatives face the bloody war against pirates in the South China Sea. Due to lack of justice in the country, many government officials and the Empress Dowager abandon their positions and become traitors in society. Wong and his courageous but sometimes hapless outfit attempt to uphold justice by joining forces with a court magistrate and his group of henchmen as they struggle to survive in a deteriorating court hall and suffer in poverty, but still remain loyal and trustworthy at the same time. Aunt May (Jean Wang) and Aunt Yee (Rosamund Kwan) also feature, showing their love interests for Wong throughout.

Of all the entries in the ‘Once Upon A Time In China’ series, this will most likely be considered the worst.  Despite my attempts to avoid the negative feedback and watch it from a clean perspective, it is just too disjointed and the acting is sloppy. Problems also arise from the frequent use of teeth grinding comedy and weak screenplay involving Wong’s students. During some scenes, they become a major irritance and can be quite distracting to the film’s realism. Even the following sequel, ‘Once Upon a Time in China and America’, did a better job and remained a more faithful sequel than this film (although this was aided by the inclusion of top action choreographer Sammo Hung and the return of original actor Jet Li)!

Due to a fallout between former Wong Fei Hung actor Jet Li and director Tsui Hark, the younger talented performer Vincent Zhao was given the lead role as Wong Fei Hung in the 4th and 5th parts. Both are Wu Shu practitioners but Jet is slightly more experienced and his international status is secured whilst Zhao still remains sadly underrated and only makes very occasional appearances in movies and like many others, focuses on TV and simultaneously drifts away from the industry. However, it wouldn’t be right (nor fair) to put the two in direct comparison as they both have different values in acting/performing in film.

On the plus side, actor Xiong Xin-Xin returns to the series and plays the Northern style practitioner of kicking, ‘Clubfoot’.  Kent Cheng also reprises his role as the legendary Lam Sai Wing, although this was to be the last time. Sadly the original Leung Foon and Buck Tooth So actors (Yuen Biao and Jacky Cheung) only feature in the first film and have since then been replaced by Max Mok Siu-Chung and Roger Kwok.

For those that hate the frequent use of wire-fu (like me), you better look elsewhere as action choreography for this film relies heavily upon its use. This is unexpectedly combined together with a number of heavy firepower battles and somewhat intolerable violence which only seems to make things worse. In its defence though, the fact that Zhao sustained a serious injury during production may explain why wires were necessary although it doesn’t explain why they were used throughout ‘Once Upon a Time in China IV’

Overall, this is a disappointing movie but it’s not exactly bad in the traditional sense of the word. However, I wouldn’t recommend it to casual viewers and think it’s more of a guilty pleasure for hardcore fans of the series.