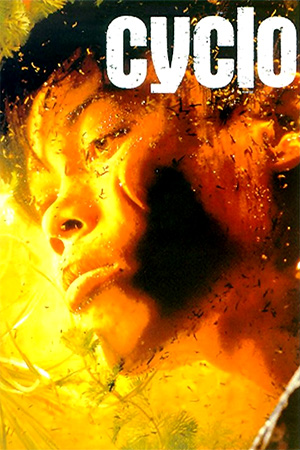 Tran Anh Hung’s mid nineties follow-up to his wonderful debut feature ‘The Scent of Green Papaya’, ‘Cyclo’ is a completely different and much more dark affair, that is often mesmerising, baffling and frustrating all at the same time. One thing it certainly is: is experimental with a narrative less concerned with plot and character exploration than with mood, the random nature of things and in some cases, extreme violence. Set in the sweltering heights of Ho Chi Minh City, ‘Cyclo’ explores the lives of a few connected beings living on the edge of society. Cyclo (Van Loc) is a lowly pedicab driver trying to scrape out an existence ferrying people around the city to provide money for his family. Barely making ends meet, he is targeted by a local gang who steal his pedicab making it impossible for him to work. With no choice he ends up running errands for the gang’s Madam (Quynh Nguyen) and one of her mysterious enforcers/pimps Poet (Leung Chiu Wai). Held under the violent hold of the gang, forced to commit more and more severe crimes and with Poet taking an unhealthy interest in his sister, Cyclo is forced (or is it seduced?) into a violent criminal underworld that threatens to break his mental state and offers little chance of escape.

While the story sounds fairly straightforward, ‘Cyclo’ is a complex film to follow as Tran Anh Hung escalates proceedings into ever increasingly experimental and almost hallucinatory states as the mental well being of the three principles (Cyclo, Poet, Cyclo’s sister) deteriorates. A structured narrative gives way to more a free form type of storytelling as events almost happen at random, a raw energy carrying events from one to the next as the characters begin a slow decline into mental torture. The incredible cinematography and the commitment of the cast help to carry the film through its tougher moments and while the stylised storytelling can be exasperating at times it can also be intoxicating. The surreal nightmare vision of these characters lives is repulsive but often captivating to watch.

This is partly due to the cast, who really immerse themselves into Tran Anh Hung’s world.  Le Van Loc (who’s only film credit appears to be ‘Cyclo’) is incredible as the troubled teen and while his transformation from quiet rickshaw boy to drug and alcohol hazed killer happens a little fast, it’s rendered frighteningly real by Van Loc’s impressive performance that by the time he covers himself in blue paint and starts brandishing a gun you will be wondering what level of hell this kid has found himself in. Likewise Hong Kong star Tony Leung (‘Hard Boiled’, ‘Hero’) is intense as the near silent Poet: a man rendered near cripple to do the right thing by his own inadequacies and insecurities, meaning he often hurts those closest to him in the most horrible ways.

Unfortunately ‘Cyclo’ falls short of being a great film due to its own experimental commitment. Tran Anh Hung’s style does become stale and maddening after a while and it certainly won’t be to every viewers taste: though those who love their cinema of the art house variety will probably lap it up. ‘Cyclo’ isn’t a happy film either as coupled with the slow burn pace and abstract narrative, the film features its fair share of violent and degrading acts that still shock in this day and age. However, if you give it a go it can be a rewarding and all together different movie viewing experience and shows the director is a gifted talent who can switch from gentle and beautiful (‘The Scent of Green Papaya’, ‘Vertical Ray of the Sun’) to the dark and the violent (‘Cyclo. ‘ I Come with the Rain’) with ease and skill.