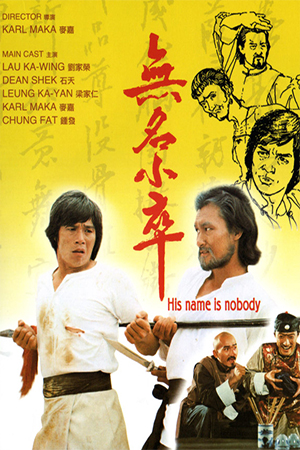 It’s been a refreshing sight to see Mei Ah and other Hong Kong DVD companies release many old school kung-fu films on this latest format. Although few of these could really be called ‘classics’, it’s nonetheless pleasant to see some forgotten genre films finally reach a wider audience. ‘His Name Is Nobody’ gained a moderate cult reputation years ago so its arrival on DVD is certainly welcome.

After being abandoned as a child, street urchin Nobody (Lau Kar-Wing) turns to petty crime to support his meagre existence. As the years pass and the town bullies continue to target the helpless loner, he gradually uses his wilier skills to defend what little he has. The chance to earn a higher standard of living comes when he befriends a slick con-artist (Shek) who agrees to teach him the tricks of the trade. With a few modest cons under their belt, the duo are offered a chance to make some big money when the teacher’s brother (Maka) turns up with a dangerous mission: the assassination of a vile hitman who is the scourge of the town. Using the brother’s wife to lure him and an arsenal of weapons to achieve the task, the team carry out their plan. However, the killer, Dreg (Chong Fat), is not fooled and kills the wife while scaring the others off. Alone again, Nobody manages to be accepted by another master, this time a local fighter who teaches him kung-fu. Eventually a twist means that the various parties meet once more and the chance to defeat Dreg and gain revenge is on the horizon.

It’s surprising to report that, although Yuen Biao and Lam Ching Ying are involved in the choreography, the action is good, but not great. Though looking great on paper, none of the fights could be described as spectacular and they mean that it will not really satisfy ardent kung-fu fans. However, ‘His Name Is Nobody’ is still a diverting production that manages to challenge a few of the clichés of the genre. Foremost among these is the teacher/student dynamic which is here given a slightly different slant by director Karl Maka. As a film-maker better known for comedy, Maka concentrates on creating an atmosphere on genuine fun. Even the usually annoying Dean Shek turns in a good performance; although he starts out as his trademark odd-ball, Shek is endearing by the end of the film. ‘His Name Is Nobody’ is not one of the best of the genre – it wouldn’t really stand-out from a crowded field. Nevertheless it entertains throughout its duration and despite the usual kung-fu comedy conventions turning up (the usual moment where a local villager is harassed by three bizarre bullies is played out three times!) it is a breath of fresh air.