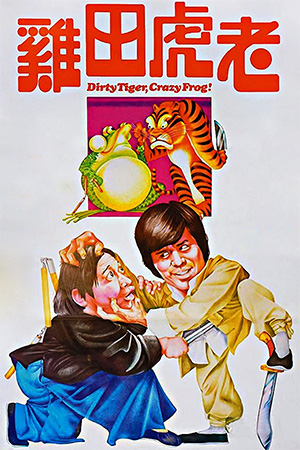 Dirty Tiger (Lau Kar-Wing) is a sly bounty hunter whose main interest is in making money from his unusual assignments. One such job sees him hired by an abandoned wife to find her missing hen-pecked husband, Crazy Frog (Sammo). Frog is meanwhile blissfully unaware of his hunter, but soon has his own troubles when a crafty gold-digger manages to trick him out of his prized possession – the Invincible Armour. This Armour is not the expected kung-fu technique or manual of martial excellence, it is in fact a thin chain-mail vest that is impervious to blades. When Dirty Tiger finally catches up with his target he agrees to help him get back the Invincible Armour, though he naturally has his own ulterior motives for this. Numerous crosses and double-crosses soon occur as each of the varied parties realises the true value of this unusual treasure. If the villainous groups are not bad enough, Dirty Tiger and Crazy Frog are engaged in a relentless battle for supremacy along the way – a dispute which loses them the Armour on more than one occasion. The true ownership is finally settled in an intricate fight between the uneasy duo and their ruthless rivals.

The artistic merits and overall success of ‘The Odd Couple’ meant that the same team were once again given the chance to rekindle the magic. Though it is often treated as the sister production, ‘Dirty Tiger, Crazy Frog’ simply doesn’t match up to the heights achieved in Sammo’s classic weapons film. Whereas ‘The Odd Couple’ was directed by Lau Kar-Wing and therefore concentrated more on the martial arts side of things, ‘Dirty Tiger, Crazy Frog’ is helmed by comic actor/film-maker Karl Maka. This unfortunately means that the focus is on the humour rather than the action and because of this it lacks the spark it needs. None of the fight scenes – bar the finale – have enough polish to stand out among a crowded genre and with the comedy invading any promising scenes the viewer is robbed of real satisfaction. What also becomes tiresome is the back-stabbing of the two leads and their relentless bickering; although starting off with a degree of entertainment, this device soon outstays its welcome. The main reason for watching is really Sammo Hung who rarely stars in anything that isn’t worth at least a passing glance. Here Sammo takes centre stage in a couple of sequences and continues to dazzle with his physical mastery and overall magnetism. ‘Dirty Tiger, Crazy Frog’ doesn’t compare to Sammo’s classics, but it’s diverting enough to persuade genre fans to catch it. An adequate action fix, though little else is on offer.