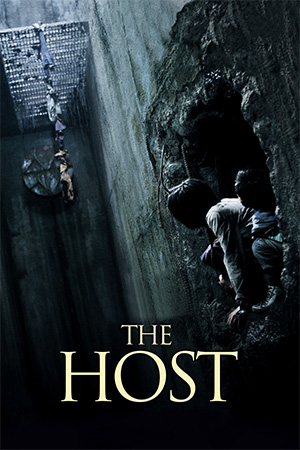 Firstly an apology on behalf of everyone at ‘Far East Films’ for not getting this minor classic reviewed sooner: we all had good intentions to praise it in the manner it deserves, but alas other films overtook these intentions and we’re joining the party noticeably late. Despite appearing on DVD, Blu-ray and even Channel 4 in the U.K. – to the extent now that it can no longer be considered a cult classic – our site needs the enrichment of including Bong Joon-Ho’s work in our sizeable catalogue of reviews, especially since ‘The Host’ appeared in many of our staff’s respective top ten lists of the past couple of years.

Seoul loser Park Gang-Du (the irrepressible Bong Joon-Ho) is single parent to a precocious young girl and the chief proprietor of the family snack stall. Though the day starts as any other – with the dozing wastrel struggling to stay awake – all of this changes when a large, mutated beast emerges from the river Han, violently disrupts the sunbathing citizens, kills a handful and then leaps back to whence it came. Park discovers a heroic side at this point, eagerly saving all he can while unaware that his beloved daughter has been snatched by the creature and taken to its lair. On finding her missing, the inconsolable father decides to set out and find her, killing the beast in the process.

Aiding the reluctant hero in the task is his indignant father, a over-critical brother and a former Olympic archer sister who is running low on confidence. The government may have quarantined the whole area and anyone who made contact may be hunted by the occupying U.S. army, but the family is determined to find where the little girl has been taken. A race against the authorities and the returning beast emerges and the Park family unites against whoever stands in the way.

Director Bong Joon-Ho gave the Korean public one of its biggest hits of all time with ‘The Host’. Partly, some might say, due to the slick production values, reverence to Hollywood blockbusters and a dash of relatively expensive computer effects. That certainly adds to the feeling that this is another local production punching well above its weight. The fact that even the most reticent of international audiences have embraced this, even with subtitles!, would imply that, to truly succeed, Korean cinema needs to bow down to the undoubted masters of the creature feature. Yet ‘The Host’ has so much more to offer.

However smartly presented this big budget hit is, it is the dry Korean eccentricity, Bong Joon-Ho’s confident orchestration and the actors at the forefront who make this so captivating. This is a big story told with ordinary people, even Bae Doo-Na as the expert archer seems to have stepped straight of the street. We’ve become so conditioned by Hollywood disaster heroes – usually divorcees, always ignored by the authorities and inevitably matched to the bolshy heroine – that the idea of ‘real’ people encountering the extraordinary has long since perished (perhaps ‘Cloverfield’ excepted). In ‘The Host’ the heroism of the Park family is not superhuman, merely an expression of the natural family love we’d all like to think we’d embue in disasters.

Korean film fans will look beyond even these numerous strengths and point out the outstanding cast who bring this work to life. Song Kang-Ho is sublime as the indolent anti-hero who is forced to discover inner strength – a sub-plot that adds a little firmly planted pathos within the excitement and humour. Bae Doo-Na is as arresting as ever, while Park Hae-Il is difficult fault as the slightly unhinged brother of Park Gang-Du. If you’ve yet to savour ‘The Host’, these performances and sheer multitude of qualities throughout should inspire you to watch it immediately.