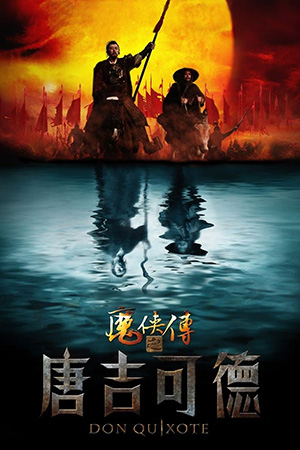 One of the greatest works of literature, Cervantes’ ‘Don Quixote’, is brought to the screen in a surprising location. A good decade or so after Terry Gilliam’s vision of the novel ended in disaster – prompting some to say that the story itself was ‘unfilmable’ – this Chinese version appeared in Asian cinemas.

Although relocated to China, the story remains practically untouched. Tiang Ji a.k.a. ‘Don Quixote’ (Guo Tao) is the mentally troubled man who imagines himself to be a crusading knight after consuming too much pulp fiction. Eager to set out and right the wrongs across the land, he acquires a faithful squire in the shape of ‘Sancho Panza’ and leaves his worried family behind. The two hopeless cavaliers manage, through no fighting skills of their own, to accrue a fearsome reputation throughout the land and while Don dreams of his captured ‘princess’, Sancho is motivated by the promise of ruling over his own island.

The idea of ‘re-imagining’ of one of my very favourite works of fiction filled me with worry. The thought that Chinese cinema would be tackling it – after a few years of weak populist releases – turned that worry into a sobering dread. Yet Kiefer Liu’s adaptation is not only quite faithful to Cervantes’ words, but also a very enjoyable film in its own right.

Although the story has been moved from Spain, the grand characters of ‘Don Quixote’ are perfectly suited to the age of chivalry in China; Don Quixote becomes just as endearing and deluded despite this new environment. Guo Tao plays the title role supremely well, straight-faced uprightness even in the most absurd situations. To sympathise with Quixote – a protagonist who has literally gone insane – the audience needs to see beyond bizarre mannerisms and cartoonish behaviour; Guo Tao achieves this with aplomb while Liu Ha is just as Sancho Panza should be as the rotund sidekick.

‘Don Quixote’ is one of the great epics of literature and so it is little surprise that Kiefer Liu concentrates on just a few of the story’s narrative twists. Gone are Cervantes ingenious post-modern (long before the phrase was coined) side-plots about the character becoming another character in someone else’s fiction. To tackle these grand themes of the complex novel would probably be a little foolhardy given the obvious limitations of film. Yet Liu provides a more than acceptable ‘Don Quixote-lite’, a necessarily truncated interpretation that will hopefully inspire some to read the Cervantes masterpiece in full.