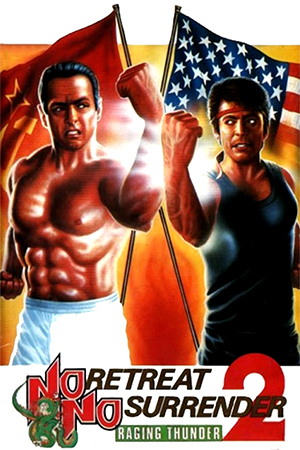 This was originally intended to be a direct sequel to the first ‘No Retreat, No Surrender’ which launched the career of a certain Jean Claude Van Damme. However Van Damme pulled out feeling the film would not have furthered his career while persuading co-star Kurt McKinney to do the same. As a result, the story was changed with Tae Kwon Do expert Loren Avedon and Matthias Hues drafted in to play the American and Russian stereotypes.

The basic synopsis sees Avedon’s character call in some friends in an attempt to rescue his Thai girlfriend, while strangely coming across a contingent of the Russian army (camped out in the Vietnamese jungle!) in the process, as well as a group of fake Shaolin monks. (Blame Keith W. Strandberg for the script!).

Surprisingly, for an American film, there are some well executed and imaginative fight sequences predominantly showcasing the excellent kicking skills of Avedon. This is clearly the influence of Yuen Kwai who was not prepared to concede too much to the American filming and time constraints. The finale, while inferior to the first films final reel, features Cynthia Rothrock as a hard-hitting, tough talking helicopter pilot (not a cop/CIA/FBI agent for a change!) showing some of the moves which made her name on the Jade screen. This movie is one of the only 80’s flicks that uses her real voice!

Loren Avedon did not follow Jean Claude’s example and stayed on after this film fulfilling his 3 picture contract, notably with the decent third instalment of the NR, NS series: ‘Blood Brothers’ with the excellent Keith Vitali (Yuen Biao’s opponent in ‘Wheels on Meals’) and I am surprised he was never used in a ‘real’ Hong Kong picture as he is clearly skilled and quick enough to have made a good screen villain.