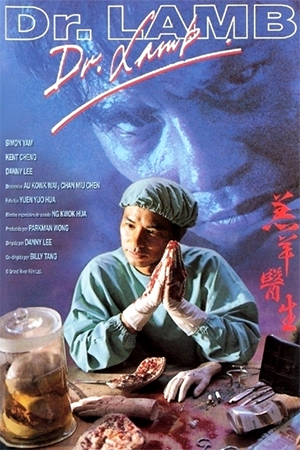 When a set of sexually explicit photographs turn up at a processing lab, the authorities are called in to investigate.  By the looks of the girl’s lifeless postures and pupil dilation, the police conclude that it could be a dead body so they decide to intercept the owner when he picks them up.  Lam Gou Yee (Yam) is the man who enters the shop requesting the photos and despite claims he is collecting them for someone else, the police take him into custody.  After constant questioning, Lam is finally broken but nothing could have prepared the police for the horrific stories they are about to hear.

As the final credits rolled, I couldn’t help but feel somewhat unfulfilled by ‘Dr. Lamb’.  After all, numerous reviews and fans have always pointed to this film as a cornerstone of the Cat III horror genre. For me though, it seemed like a fairly hollow affair that revolved primarily around the scenes of extremely uncomfortable violence.  Despite avoiding the typified serial killer game of cat and mouse, the obvious lack of a significant narrative seemed to be the films major downfall.  With Yam imprisoned from the very beginning, all we really get to see is him recounting the details of his crimes (in extremely gory detail) accompanied by glimpses of his wafer-thin back-story that is supposed to justify his descent into insanity.  Sadly, neither of these elements are particularly engaging and it feels more like a selection of police crime re-enactments rather than a fully-fledged cinematic outing.

Artistically, there are still a couple of pluses that emerge from this disappointing affair.  Yam is on form (as usual) and in his element as the sadistic killer, with howling screams and a hazy stare that sends shivers down your spine.  He is totally believable in the role and hams it up to the extreme.  Danny Lee and Billy Tang also combine effectively in the director’s chair, maintaining the necessary suspense while Yam is on the hunt for victims and utilising effective camera angles to display the murders from every aspect (although not necessarily a good thing).  The musical score is another bonus as it’s such a crucial element for a film of this style and ‘Dr. Lamb’ puts out a particularly memorable one.  In retrospect, when you look at all these advantages it’s a real shame that the story is not nearly as compelling as the obvious efforts from the cast and crew.

Despite the occasional bloody highlight, ‘Dr. Lamb’ is a tough film to recommend as it often feels like little more than a collection of brutal murders.  I’m sure this will appeal to the gore fans amongst you, but the majority of viewers may prefer to leave this one lurking in the shadows.