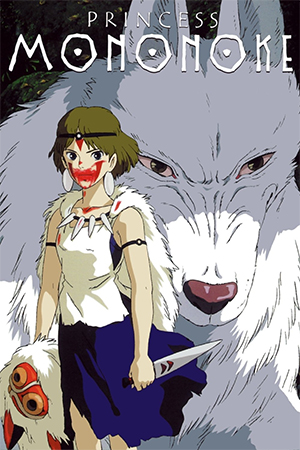 After his village is attacked by a possessed boar, Ashitaka finds himself inflicted by a curse that threatens to spread throughout his entire body.  The village elders suggest that he travel west where rumours are abound of a Deer God who is capable of curing all.  On his travels Ashitaka seeks shelter at a village of iron miners where he discovers a furious battle is underway between the humans and the animals.  The animals are led by Princess Mononoke, a human girl raised by Wolves who is adamant to keep her new family safe whilst the humans are really only attempting to do the same.  Ashitaka does his utmost to cool the feud but he must also concentrate on removing his curse, a task becoming increasingly difficult as a group of hunters look to find the Deer God for their own purposes.

When it comes to anime movies, Studio Ghibli is fast becoming my one-stop-shop for reference material from the genre.  Their fascinating back catalogue of films span a multitude of subjects that utilise a variety of styles, all of which appear at their most engaging when Hayao Miyazaki is at the helm.  ‘Princess Mononoke’ is considered by many to be Miyazaki’s crowning glory and watching it now, it’s easy to see exactly why it is so highly regarded.  The film is littered with tremendously three dimensional characters that inhabit a lavish and realistic world, all of which are explored through the innocent eyes of a child (a common trait in Miyazaki’s films).  Although perhaps not quite as meticulously polished as ‘Spirited Away’, this is still a film that conveys numerous noteworthy messages and exhibits exciting action set pieces along with a set of characters that are easy to empathise with.

There have been many arguments based around the true meaning behind ‘Princess Mononoke’ and it’s often felt by enthusiasts that Westerners fail to grasp its core concepts.  Speaking for myself, the most important message appears to be an ecological one that reiterates the human mentality to destroy nature for our own development but it isn’t without both sides of the argument.  Before you panic though, this is not another exercise in “how to become a hippy” as perfected by Steven Seagal in ‘On Deadly Ground’, it is in fact a subtle approach at delivering a very real message that is often so restrained that it is possible to overlook it entirely.  Obviously for the kids this will mean that they can enjoy the film without feeling forcibly educated and hopefully the message will slyly sink into the subconscious, giving everyone food for thought.

As has also become the norm with Ghibli productions, the animation here is second to none.  The human characters are a joy to behold and express a multitude of facial expressions that constantly amuse but are always capable of conveying the serious emotions when required.  However, it’s the bizarre creatures that inhabit Miyazaki’s worlds that really provide his films with their true beauty.  With ‘Princess Mononoke’ we are treated to the likes of the errie yet cute Kodama who dwell in the forests, the sublimely animated Deer God (Shishigami) and the monstrous boar Okkotu, to name but a few.  Each of these are so imaginatively created and unique that one wonders how it is possible to keep inventing such ingenious creations.

To attempt to organise Miyazaki’s films in order of quality would be unfair as each one is just so uniquely entertaining. ‘Princess Mononoke’ is definitely amongst his best though, as it’s a fantastical story filled with a meaningful narrative and superb characters. Truly another masterpiece from the mind of Miyazaki.