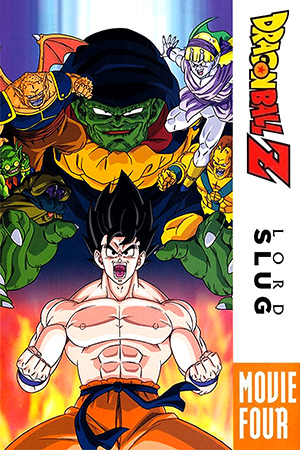 When Bulma and her father discover that a gigantic meteor is hurtling towards Earth, Goku and Kuririn rush to the scene to try and stop it with their powers. Although they are unsuccessful, the meteor explodes just outside of orbit and is replaced by a strange building-like spaceship. Inside is an army of heavily armoured soldiers led by the dastardly Lord Slug. After subduing any humans in the vicinity, Slug and his men set about terraforming the planet as they intend to use it for their own personal spaceship. Luckily though, Earth has a handful of heroes who may have a thing or two to say about their intentions.

‘Dragon Ball Z: Lord Slug’ is what you’d call a real no-nonsense offering from the franchise. Aside from a brief opening musical interlude (which does actually serve a purpose later on), the film wastes absolutely no time in jumping into the action. The batch of new villains, all looking to destroy the Earth of course, are introduced almost instantaneously and then it’s really nothing more than a handful of battles between good and evil. While this may not sound all that impressive, it’s definitely a decent setup for a ‘Dragon Ball Z’ movie and there is an interesting twist to the finale that certainly adds a bit of spice.

Considering there really isn’t much of a plot, it’s no surprise that this particular movie is chock full of fight scenes. Gohan is the first to kick things off as he launches into action the moment he sees things going a little south, and then it’s pretty much a case of each of the main characters making their way to the battleground. While I have to admit that none of the fights are what I would call outstanding, they are all definitely fun to watch and we even get a glimpse of a semi-super Saiyan after Goku is pushed to his limit. My only minor complaint is that the ending proves to be far too predictable as Goku once again whips out the same old finishing move that he seems to use in just about every other movie.

‘Dragon Ball Z: Lord Slug’ is a very simplistic outing that is really little more than an excuse for a handful of new fight scenes. For this reason alone, casual viewers may want to give this one a miss as there isn’t a lot that deviates far from the traditional formula. However, long-time fans of ‘Dragon Ball Z’ who can’t get enough of those crazy Kamehamehas will likely find plenty to appreciate here.