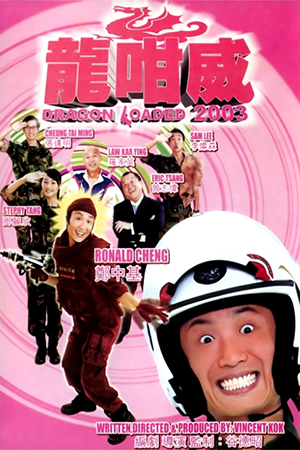 After moments of comic promise with supporting roles in such films as ‘My Lucky Star’, Ronald Cheng finally confirmed his status as a rising comic star of the future with the box-office success of ‘Dragon Loaded 2003’. Unlike some of his contemporaries – particularly Nick Cheung – Cheng seems to have cemented this promise by following up a surprise hit with other financially impressive comedy films, honing his screen persona with each one. ‘Dragon Loaded 2003’ still has enough of the attributes that Cheng has since refined in his work and, therefore, is a good indication of what potential viewers will make of his future films.

Idle layabout Dragon (Cheng) is more interested in flouncing through Hong Kong’s chic city with his friends rather than be involved in his father’s sportswear empire. When the future heir is told to prove himself or face seeing his fortune cut-off, he is forced to join the police force along with his two best friends (Cheung Tat Ming, Sam Lee). On arrival, Dragon is horrified to see how restrictive the police academy is and he wilts under the disciplined training he is subjected to. Desperate to leave, but aware of his father’s demands, Dragon and his cohorts decide to try every trick to get thrown out of the academy and have their responsibilities lifted. Their attempts are scuppered, however, by the superintendent’s promise to Dragon’s father that the work-shy threesome  will finish their training. On top of this obstacle, Dragon finds himself falling for a fellow trainee (Stephy Tang) and resolves to prove his maturity to her. While his initial approaches are rebuffed, a joint assignment for the pair is the perfect opportunity for love to blossom.

‘Dragon Loaded 2003’s shameless plundering of ‘Police Academy’ is so bare-faced, it’s difficult to know whether to admire it or criticise it. Much, of course, depends on the potential viewer’s interest in the original. Nevertheless, what is more obvious is that ‘Dragon Loaded 2003’ is rough around the edges, lacking the kind of cohesion that keeps more successful comedies consistently amusing. While Ronald Cheng’s personality explodes onto the screen without apology, the surrounding areas i.e. storyline and script, are less impressive. ‘Police Academy’ wasn’t high art, but it took its simple premise and kept it focused throughout the duration without getting too bogged down in sub-plots. ‘Dragon Loaded 2003’ staggers erratically through its 100 minute running time, only periodically hitting its comedic targets successfully.

Though Ronald Cheng’s outrageous, cowardly demeanour is on full display here, director Vincent Kok doesn’t allow the character the freedom to flourish that he deserves. ‘Super Model’ veered drastically from the original storyline, but had enough wit and whimsy in its incidental scenes to make the entire film work. Kok wastes a storyline that has been rich pickings for the genre in the past and, instead, relies on Cheng’s energy; though not necessarily a fault in itself (many of Chow Sing Chi’s earlier films have utilised their star to maximum effect), it is problematic when there seems to be little direction for the characters. There’s a lack of invention in the expected spoofs of popular films of the time – something that Kok again has to take some blame for.

‘Dragon Loaded 2003’ pales in comparison to ‘Super Model’, though there are brief moments of promise that shine through the pedestrian nature of the film. One refreshing aspect is the chance to see Sam Lee and Cheung Tat Ming appearing as Cheng’s hopeless sidekicks; their dopey mugging provides the manic energy of Ronald Cheng with able support. The romance between Cheng and Stephy Tang is less engaging though; it starts off sweetly, but is eventually blocked by the fact that the characters are so incongruous. ‘Dragon Loaded 2003’ is a typical Hong Kong comedy with a little injection of romance, but never rises above the ordinary. Thankfully, Cheng’s follow-up proved to be more capable.