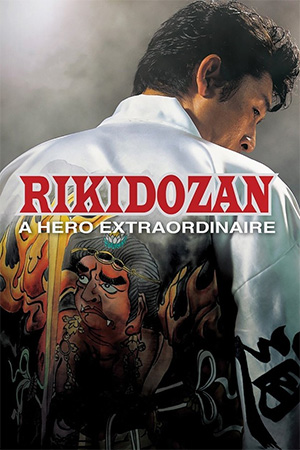 ‘Failan’ director Song Hae-sung follows up the emotionally draining drama with this biopic on legendary Japanese wrestling idol ‘Rikidozan’. What opens the subject matter to a greater audience is the hostile environment that the Korean born athlete grew up in, the inherent racism he faced from the occupying Japanese and the lengths he went to in breaking free from his numerous inner demons.

Kin Sin-nak grows up in a Korea fully occupied by the Japanese invaders and finds his ambitions in Sumo wrestling compromised by his ethnicity. Despite adopting the name Mitushiro Momota, the bullying he faces from fellow classmates at the Sumo academy tests his resolve and only the patronage of a local kingpin offers him the necessary support he needs. After a drunken brawl brings his talent for belligerence to the attention of a Hawaiian wrestler, Momota is encouraged to use his skills in the nascent American Wrestling scene and begins to adapt his very Japanese technique to the freestyle arena.

The newly dubbed ‘Rikidozan’ finds a crushed Japanese society around him following the Second World War and insularity that pushes away any Western ideas. Rikidozan therefore travels West to hone his skills and find an audience appreciative of his abilities. And so the terrifying villain from the East is born, battering the adored local wrestlers and revelling in his new image. In his homeland he quickly becomes a star, a means of building up the Japanese national psyche after it suffered humiliation after the war. Yet his inner demons threaten to derail his popularity and the spectre of past mistakes begins to catch up with the superstar.

Adept at evoking its specified era with slick detail, ‘Rikidozan’ is a confident, fast-moving production that is not averse to overtly stirring the emotions to get its point across. A story that may be hitherto unknown here in the West has all of the human drama and tribulation that should not limit its appeal. Showing Momota as a influential figure tackling problems while trying to keep his wilder inclinations in check is a theme that is resonant throughout such studies of flawed heroes. On this sole basis ‘Rikidozan’ can be considered a success. It’s certainly not a film that is likely to alienate those uninterested in the sport as action plays a relatively small part in the overall drama.

Where Song Hae-sung’s efforts come unstuck is in trying to show what drove the talented athlete so aggressively against the problems he faced. Issues such as his constant guilt about being away from his mother are touched on throughout, but this is more in the vein of a simple line uttered by the lead rather than anything more substantial. It’s easy to get swept along with the director’s approach, as well arranged as it is, though what is lacking is bubbling under the surface. Most vitally, why Momota should identify himself so keenly with Japan – given the racism and inequality he faces because of his Korean origins – isn’t given the attention it deserves. Such a fascinating part of Momota’s story is left as a mere skeleton; it would have served as an interesting parallel with Muhammad Ali’s struggles representing a country who were still actively oppressing other Afro-Americans. Instead this key element is sadly under-developed.

‘Rikidozan’ is occasionally melodramatic, occasionally powerful, but it is undoubtedly well acted, especially by Sol kyung-gu as the eponymous wrestling legend. It’s unfortunate that the quality the film oozes doesn’t translate to the depths it should uncover. Much is left out that would have made this a much more well-rounded work – a missed opportunity perhaps, but certainly not an unimpressive two hour drama despite this.