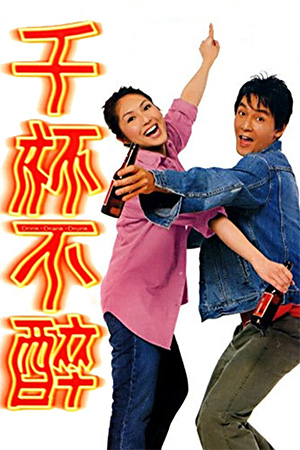 Despite a particularly awkward title, ‘Drink, Drank, Drunk’ mustered up considerable interest due to its inclusion in the ever eclectic canon of Derek Yee, a director who thrives on taking clichéd storylines and somehow making them work. Having weaved his magic with ‘C’est La Vie Mon Cherie’ over a decade ago and after taking the oft-used storylines of bereavement (‘Lost In Time’) and teenage pregnancy (‘2 Young’) and injecting them with a certain lucidity that Yee has almost copyrighted, the talented film-maker tackles the rom-com. While this is a sub-genre that, when Hong Kong cinema does well, it excels in, more often than not there is a pedestrian quality to the majority of the output. Derek Yee may not have completely turned the clich?s on their head, but at least he avoids the latter trap.

Siu Min (Yeung) is a beer promoter who dreams of opening a restaurant and escaping her dead-end job. Her only real claim to fame in her neighbourhood is her remarkable tolerance to alcohol, a strange virtue that defeats the bravado of the local heavies. One evening Siu meets Michael, a young chef who has moved to Hong Kong to open a French restaurant, but finds the locals to be too conservative for his flamboyant creations. Michael is also unable to tolerate even the slightest drop of alcohol and is more than once carried off the pavement by the kindly Siu. After preaching the qualities of sobriety to Michael, Siu goes into partnership with him and tries to use the restaurant as a day time cafe while Michael’s ailing business continues during the night. With these two damaged souls working closely together, romance is inevitable and the two finally declare their affection for one another. However, the relationship is tested by the awkward promptings of Michael’s nomadic friend who passes through Hong Kong and insists that his old travelling companion has been ‘tied down’. Then, a local businesswoman whisks away the ambitious wannabe chef and puts him in charge of one of her top restaurants. As the two go their separate ways, the question of what they both want plays on their respective minds.

Any film fortunate enough to have Miriam Yeung and Daniel Wu as a lead pair has half a chance before credits have even appeared; the chemistry between them had been successfully harnessed in the two ‘Love Undercover’ films and is only getting more natural with time. ‘Drink, Drank, Drunk’ affords the couple another chance to play romantic leads while also placing a director of Derek Yee’s calibre behind the lens. It is no accident, therefore, that the Yeung/Wu combination is confident enough to paper over the cracks of this hugely enjoyable, but far from classic rom-com. Wu, in particular, has grown immeasurably since his tentative start in films and manages to work well despite being saddled with an inconsistent character.

The whole gimmick of ‘Drink, Drank, Drunk’ adds nothing to the storyline or the development thereof. Apart from setting up a disappointingly flat denouement, these character traits are unnecessary rather than endearing. Yee also struggles with the somewhat bloated running time of this mostly breezy summer hit – too many short scenes could’ve been cut to hasten the pace without there being much detriment to the overall effect. Though Yee is a film-maker who tries to allow his characters some breathing space, the whole production could have lost ten minutes without sacrificing coherency.

Despite a few criticisms, Yee has crafted a capable film with a tender heart, something not easy to achieve in the cynical world of film-making. Having added a subtle humanity to so many kinds of narratives recently, it’s little wonder that his direction moves ‘Drink, Drank, Drunk’ out of the crowd. It has a few good moments of comedy without saturating the whole story with that annoying ‘wackiness’ that infuses so many casualties of the genre. Meanwhile its stars are so professional in their roles that it would be difficult for this film not to be watchable at the very least. A recommended Production that may not linger too long after the end credits, but has enough strengths to ensure a light and frothy ride.