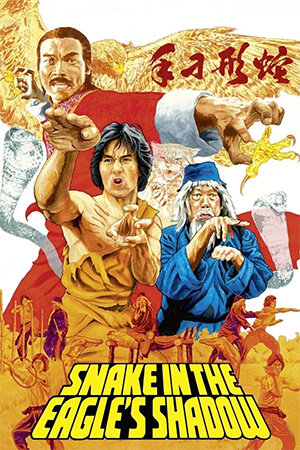 The blueprint for Jackie Chan’s greatest success ‘Drunken Master’, and in many ways a superior film, while not quite as impressive in the action stakes. ‘Snake In The Eagle’s Shadow’ (SITES) gave Jackie his first chance to shine outside the reigns of Lo Wei, and under the expert guidance of Woo Ping and Ng See Yuen delivers a classic of the genre, and one which fans the world over are just starting to enjoy as his back catalogue is released onto DVD.

The plot is fairly simple and sees Jackie as an orphan taken in by a kung fu school where he spends his time doing odd jobs, while also being the human punch bag on whom many of the students practice. When he helps an old beggar from being attacked, he inadvertently gains a new friend. The beggar (Yuen Siu Tien) takes a liking to Jackie and offers to teach him his snake fist kung fu. Meanwhile a group led by Hwang Jang Lee are out to destroy this style of kung fu creating the backdrop for a number of excellent training and fight sequences, much like the later ‘Drunken Master’.

The main difference between ‘DM’ and ‘SITES’ is only slight. ‘DM’ has longer and more fluid fight choreography, as well as extra comedy, while ‘SITES’ works better on a dramatic level with more empathy lent to the characters. If you like one, you should like the other, and both are fine examples of the early kung fu comedy which was to shape the Jade Screen at the time.

My own personal preference leans toward this movie, as opposed to ‘DM’, but only slightly, and I love them both. However, it is the ability for Jackie to truly make you feel sorry for him, and develop a bond in the first ten minutes which just nicks it for me. Ultimately, you should aim to own them both, as the DVD’s are excellent as are the films – Jackie at his physical best doing what made him a star in the first place!