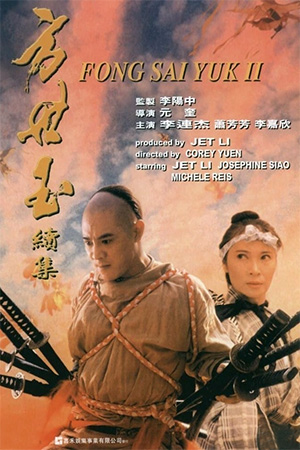 For fans of Jet Li, the original ‘Fong Sai Yuk’ remains one of his best loved films and also one of the most financially lucrative. Having scored such a big hit with this new-wave martial arts classic in 1993, director Yuen Kwai immediately gathered together most of the main cast and started work on a sequel. By the end of the year, ‘Fong Sai Yuk 2’ was out in cinemas and again reaping box-office dollars all over Hong Kong. The big question, though, was whether it was a rushed production cashing in on the success of its predecessor or a worthy sequel that puts another notch of quality on Jet Li’s filmography.

Following on from where the first film ended, Chinese patriot Fong Sai Yuk and his charming new bride join the remote Red Flower Society – a community who have cut themselves off from the harsh Manchu rulers. The young fighter is quickly given an opportunity to show off his ability when an assassination attempt is foiled at a town festival. With a reputation quickly established, Fong joins the Red Flower Society and finds that some of the other members are seething with jealousy. This rivalry becomes even more apparent when Fong is entrusted with the mission of locating and gaining a valuable scroll that is in the possession of a band of Japanese warriors. Following a furious fight, he is unsuccessful in this and is open to ridicule from his cackling nemesis (Ji Chunhua). Therefore Fong is persuaded to use his charms on the daughter of the Japanese kingpin who owns the list – much to the annoyance of Fong’s loyal wife. Beyond this period of deception is the realisation that there is a traitor in the Red Flower Society and all fingers are pointing at the newcomers. All loose ends are tied up in the elaborate finale with Fong Sai Yuk once again saving the day.

The good news is that, although not ranking alongside the original, ‘Fong Sai Yuk 2’ is a welcome slice of new-wave martial arts that delivers some sizzling action. Certain scenes within the film stand out as being worthy of constant repeat play; seeing Jet Li under the control of Yuen Kwai’s choreography always offers something special for the eager viewer. Jet Li is the obvious star of this film as he gives the film its physical, dramatic and comical highlights. However, Josephine Siao makes a welcome return as Li’s eccentric mother with her character again becoming a pivotal figure in the film.

The bad news is that ‘Fong Sai Yuk 2’ simply doesn’t run along as smoothly as it should. The plot in itself is not a terrible one as it allows some expansion, but as the film continues the confusion sets in. The sub-plots and farce elements are rushed and make for an uneasy concoction that takes away some of the film’s overall quality. The sudden switch between all-out-comedy and dramatic tension doesn’t translate into first-class entertainment in the same way that its predecessor did. It’s also sad to report that the final hero vs. villain conflict is disappointing and doesn’t offer the kind of thrills that are demanded of a Jet Li film.

In summary then, this is definitely an entertaining film that is worth catching. There is, though, the constant nagging feeling that this film could have been better.